Infertility means not being able to become pregnant after a year of trying. If a woman can get pregnant but keeps having miscarriages or stillbirths, that's also called infertility. 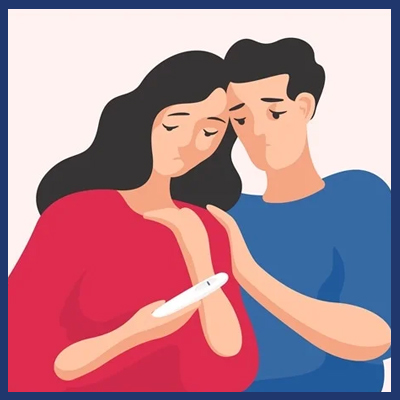 Infertility is defined as not being able to get pregnant despite having frequent, unprotected sex for at least a year for most couples.

Most couples will eventually conceive, with or without treatment.

All of the steps during ovulation and fertilization need to happen correctly in order to get pregnant. Sometimes the issues that cause infertility in couples are present at birth, and sometimes they develop later in life.

Infertility causes can affect one or both partners. In general:

Causes of female infertility may include:

Many of the risk factors for both male and female infertility are the same. They include:

Some types of infertility aren't preventable. But several strategies may increase  chances of pregnancy.

Have regular intercourse several times around the time of ovulation for the highest pregnancy rate. Intercourse beginning at least five days before and until a day after ovulation improves your chances of getting pregnant. Ovulation usually occurs in the middle of the cycle — halfway between menstrual periods — for most women with menstrual cycles about 28 days apart.

Although most types of infertility aren't preventable in men, these strategies may help:

For women, a number of strategies may increase the chances of becoming pregnant:

Homeopathy treatment of infertility is mainly achieved through the administration of constitutional homeopathic medicines found most suitable after a detailed case analysis.

FOR INFERTILITY IN WOMEN

For Infertility in Females due to Acid Vaginal Discharges:

For Infertility in Females due to too Profuse or Prolonged Periods (menorrhagia):

Two excellent medicines for infertility in females from profuse or prolonged periods are Calcarea Carb and Aletris Farinosa. Calcarea Carb is mainly used when a female with infertility has too profuse and too long lasting periods. The periods also appear before time. To prescribe Aletris farinose, the main symptoms are early and copious menses with infertility.  Leucorrhea, anemia, weakness, tiredness, and fatigue may also persist with menorrhagia. Among these medicines for infertility in females, Aletris Farinosa is also prescribed where a tendency for frequent abortions is present.

For Infertility in Females with Short, Scanty Periods:

For Infertility in Females with Decreased Sexual Desire:

For Infertility in Females due to Non Retention of Sperms:

FOR INFERTILITY IN MALES

For Infertility in Males with Erectile Dysfunction:

Homeopathic medicine Agnus Castus is best picked up when both sexual desire and physical ability are lacking. Genitals are relaxed, flaccid, and cold. Caladium, is the best choice for impotency with mental depression. Sexual desire is present but the genitals are relaxed with weak erections. Selenium is also best among the various medicines for infertility in males from erectile dysfunction. Selenium is helpful for slow, weak erections with rapid emissions. Involuntary semen discharges may also be present.

For Infertility in Males with Low Sperm Count:

For Infertility in Males with Orchitis:

Conium is the top-grade medicine among the chart of medicines for infertility in males with orchitis. It is used when the testicles are swollen, hard and enlarged. It is also effective when a history of suppressed sexual desire is present.

For Infertility in Males with Wasting of Testes: