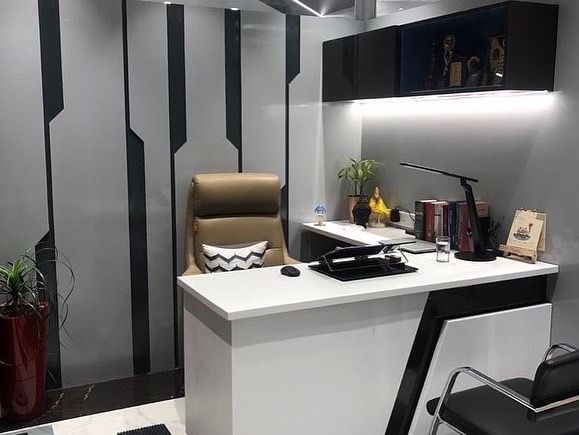 Abhi Homoeo Clinic is a one and half decade old renowned clinic that offers the best quality, non-toxic and highly effective treatment in Ranchi and Delhi. Our treatment is based on the rich and traditional classical homeopathic knowledge and usage of advanced technology. We have a team of dedicated homeopaths who work to provide efficient service that brings healing power to the patients.

Our aim is to spread the homoeopathic treatment to numerous patients suffering from broad range of diseases and to achieve success in patient care by using classical homeopathy under the brand Dr. Rajeev’s Homeopathy.

We offer excellent patient care, best service and strive to improve every patient’s health vigorously. We also provide the best medical treatment by our experienced doctors which are based on the modern scientific research. 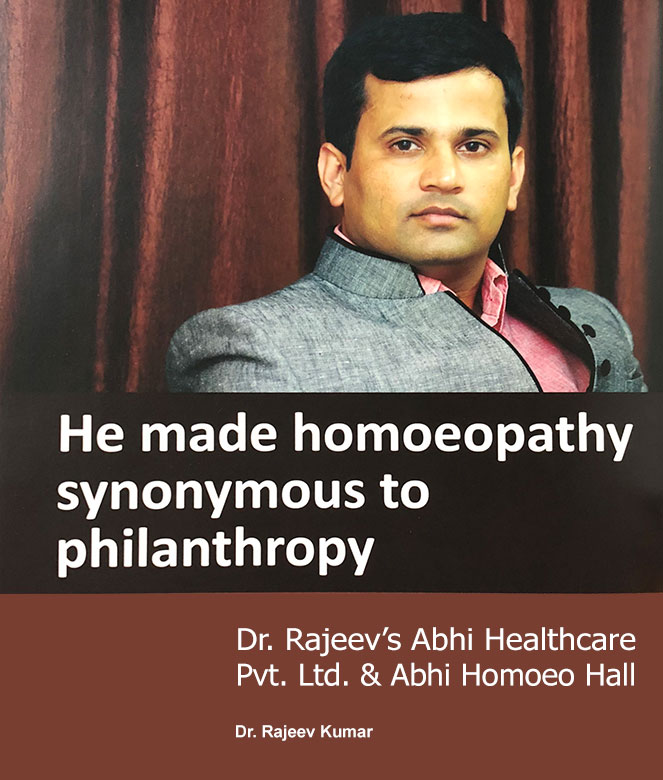 He is not the one who belives in building castles in the air. His dreams were restricted but with his tremendous courage of conviction coupled with an innovative streak, he has translated those restricted dreams into reality. Meet Dr. Rajeev Kumar, the reputed Homoeopath of Ranchi, who needs no introduction for the city dwellers.

Born in a middle class family in Gopalganj, Bihar, to a social worker father, Dr. Rajeev Kumar is one such persona who has scripted success story that is worthy emulating.

"My father, Late Kamleshwar Prasad was a social worker and a village mukhiya. Our values were our assets. There was little in the name of sacings. I came to Ranchi with just Rs.5000. Rest is history," says the homoeopath, who is a standalone in the crowd of businessmen who turned into doctor by his sheer dint of arduous labour.

In pursue of success, Dr. Kumar, started off with Abhi Homoeo Hall in 2003 as a homoeopathy medicines distributor. However, the yearning to become a doctor and serve patients kept bugging him. Soon he left the medicine business to his uncle and went to Bhagalpur to study homoeopathic medicine.

On his return, he added another feather to his cap when he set up the Abhi Homoeo Healthcare.

Dr. Kumar’s and Abhi Homoeo Hall’s journey started in a one room rented house in 2003. From a tiny spec in the vast medicine market, Kumar in 12 years has become one of the biggest distributor in the region, a renowned homoeopath and envisages the dream of opening Eastern Zone’s first private homoeopathy hospital of 30 beds by August.

But behind the story of this homoeopathic doctor’s mini-empire is a sea of challenges and struggles. Initially, destiny was unfavourable to this ypung man when he ventured into the business after procuring Bachelor in Homoeopathy Medicine and Sciences (BHMS) degree from KNH College, Bhagalpur in 2004.

“Banks were apprehensive about my venture and application for loans was falling into deaf ears. There was none to help except my uncle, Dr. Amreshwar Prasad, also a homoeopath. And when the business was somehow set up, the challenge haunted me. Some I complete the setup in a year,” said Dr. Kumar.

Reminiscing his struggle days, he reveals that in the mind of 2003, he finally got a loan to setup Abhi Homoeo Hall in a larger space at Main Road. “One bank finally accepted my-proposal. By then my uncle too had wooed a prospective clientele and recruited trustworthy people to run the business in my absence,” said the doctor in his early thirties with a beam of pride. 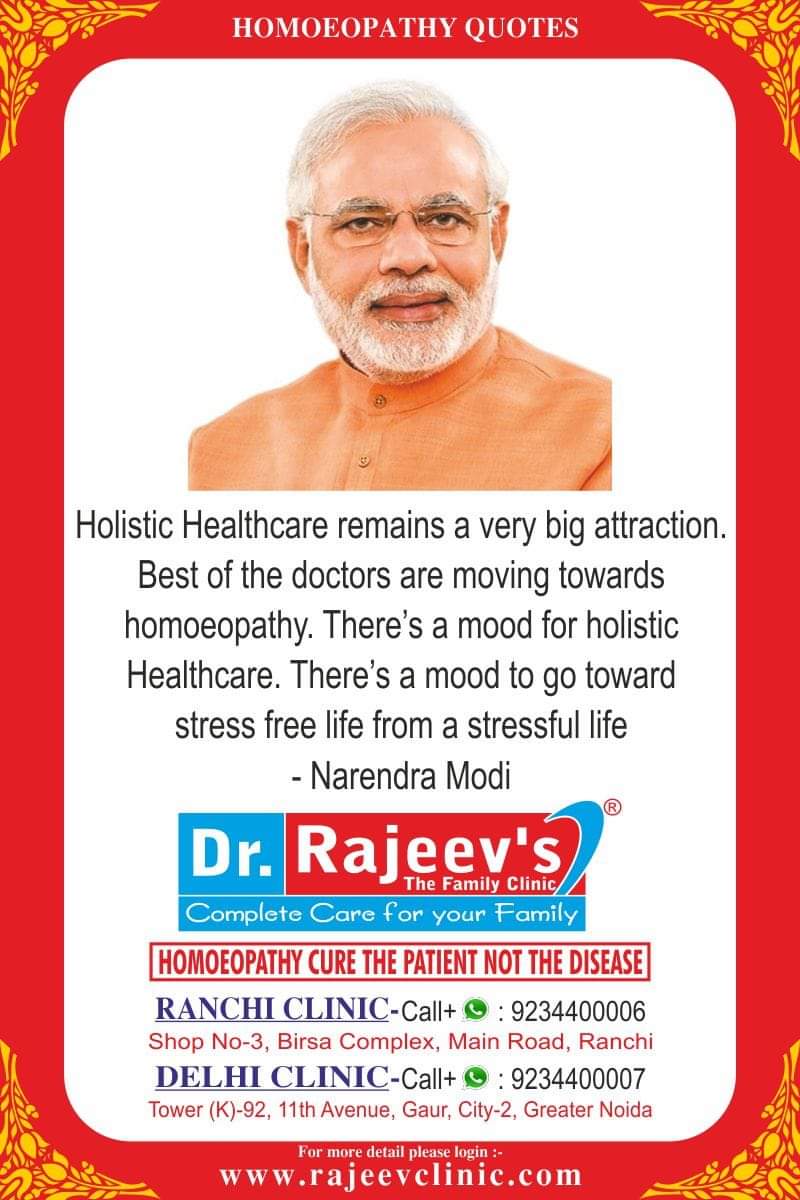 Along with studies, the medico constantly shuttled between Bhagalpur and Ranchi to manage the business. “Once it got going in Ranchi, my brothers came forward and helped me a lot in managing the business affairs. It was in 2012 after my degree that I finally settled down to take things into my control. I became the largest seller of German made medicines. Most established homoeopaths look up to my store for supplies,” said Dr. Prasad. Dr. Prasad expanded his Abhi Homoeo Hall at the existing place to an area of 1200 square feet to accommodate Abhi Homoeo Healthcare, which is a one-of-its-kind homoeopathy clinic armed with its own pathology center and pharmacy. A standalone masterpiece, the Abhi Homoeo Healthcare has broken and has virtually put them at par with his allopath counterparts. The swanky interior and exteriors coupled with quality and dependable service has already won the trust of patients, who throng to the center from far and wide.

So what is the fee one may wonder? “It’s a meager Rs.100,” he utters gently, contented and happy for keeping his treatment affordable for all sections of the society.

“I could have gone for an MBBS. But I choose homoeopathy. Unlike allopath where a doctor has to specialize in particular line of medicine, in homoeopathy a doctor is the master of all diseases. For me, Homoeopath is synonymous to social work. You provide succor to patients suffering from all kinds of disease and still charge nothing compared to the allopath doctors,” said Dr. Prasad, who recently kicked off a campaign spreading awareness on homoeopathy and its benefits.

Like minded people have joined Dr. Prasad in the campaign that has its reach across Ranchi’s rural and urban habitats. The awareness drive tells people how homoeopathy is better than allopathic medicines and has cure for all diseases. “We tell people that our medicines don’t have side-effects andf there is no surgery. We want to enlighten people that homoeopathy cures the diseases from ite roots. It means that our medicines have the strength to eliminate tae source of the disease unlike allopath which gives temporary relief,” says Dr. Prasad.

Dr. Prasad elucidates that fortunately Homoeopaths still have service as their motto keeping money at the back seat. In the days to come, the homoeopath wants to open a chain of clinics across the region under the name Abhi Homoeo Family Clinics.

Philanthropy and service to nation is in the genes of Dr. Prasad’s family. His grandfather in the post independence era gifted land to the Bihar Government to setup a homoeopathy hospital.

He is continuing the legacy hands down. A follower of Sai Baba, the doctor sees patients for free every Thursday. He holds weekly free health camps and medicines distribution at temple sites across Ranchi. For the poor, he condones his fees and medicine prices. 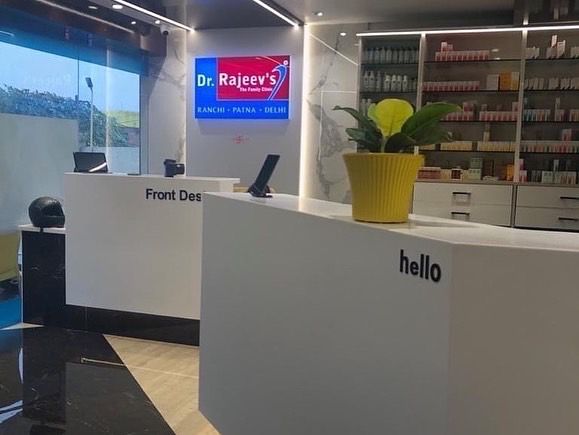 “I will grow stronger when my wife Mridula Kumari joins me. She is also a BHMS doctor. She will prove vital to my dream hospital,” said Prasad. He is blessed with two son Kushagra and Kaustubh.

Prasad says that his elder son Kushagra Kamlesh emulates him with the stethoscope and tries to understand the significance of medicines. “He sill surely tread our path,” Dr. Prasad said.

Born in a family of three sisters and two brothers, Dr. Prasad still believes that his joint family and close knitted friend circuit has been his potion of growth. Dr. Prasad says, “If you don’t have a strong family, you cannot grow. In my initial days it was my cousins and uncles who helped me. My medicine hall and clinic are named on the initials of my two cousins.” Dr. Rajeev Kumar’s success mantra is: “Never falter with challenges. They only make stronger. Take them head on and success will kiss your feet.”