Hypoglycemia is a condition in which blood sugar (glucose) level is lower than normal. Glucose is your body's main energy source.

Hypoglycemia is often related to diabetes treatment. But other drugs and a variety of conditions — many rare — can cause low blood sugar in people who don't have diabetes

Hypoglycemia needs immediate treatment when blood sugar levels are low. For many people, a fasting blood sugar of 70 milligrams per deciliter (mg/dL), or 3.9 millimoles per liter (mmol/L), or below should serve as an alert for hypoglycemia. But your numbers might be different. Ask your doctor. 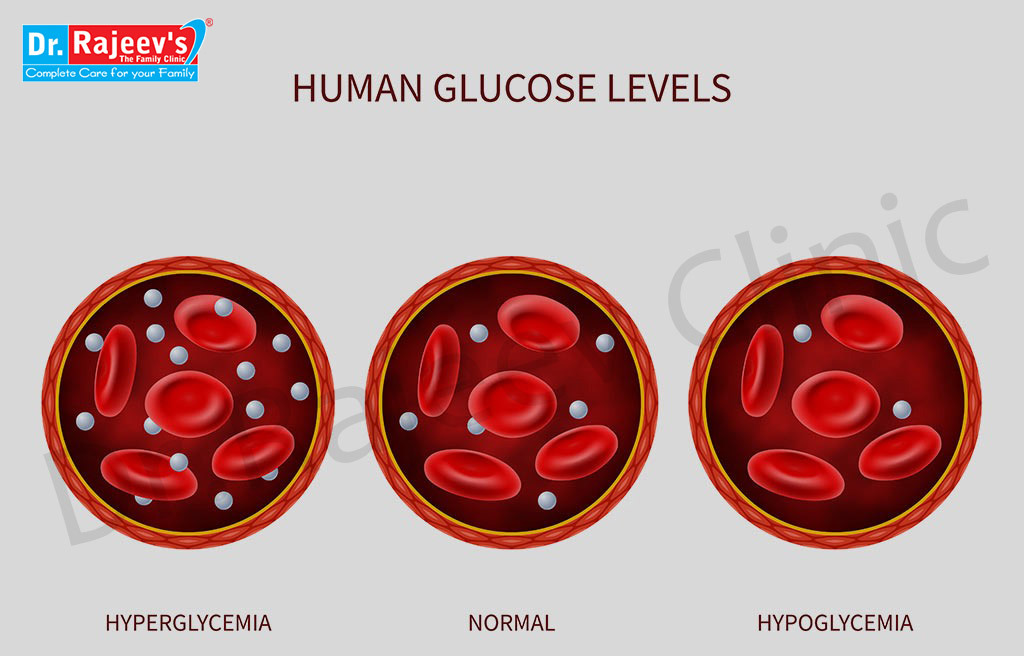 If blood sugar levels become too low, signs and symptoms can include:

As hypoglycemia worsens, signs and symptoms can include:

Hypoglycemia occurs when blood sugar (glucose) level falls too low. There are several reasons why this can happen; the most common is a side effect of drugs used to treat diabetes.

When some one eat,  body breaks down carbohydrates from foods — such as bread, rice, pasta, vegetables, fruit and milk products — into various sugar molecules, including glucose.

Glucose, the main energy source for body, enters the cells of most of  tissues with the help of insulin — a hormone secreted by pancreas. Insulin enables the glucose to enter the cells and provide the fuel cells need. Extra glucose is stored in  liver and muscles in the form of glycogen.

If some one haven't eaten for several hours and  blood sugar level drops, another hormone from  pancreas signals  liver to break down the stored glycogen and release glucose into bloodstream. This keeps blood sugar within a normal range until eat again.

If some one have diabetes,  might not make enough insulin (type 1 diabetes) or they might be less responsive to it (type 2 diabetes). As a result, glucose tends to build up in the bloodstream and can reach dangerously high levels. To correct this problem, you might take insulin or other drugs to lower blood sugar levels.

Hypoglycemia in people without diabetes is much less common. Causes can include the following:

Hypoglycemia usually occurs when some one haven't eaten, but not always. Sometimes hypoglycemia symptoms occur after certain meals high in sugar because of body produces more insulin than need.

Untreated hypoglycemia can lead to:

Hypoglycemia can also contribute to the following:

Over time, repeated episodes of hypoglycemia can lead to hypoglycemia unawareness. The body and brain no longer produce signs and symptoms that warn of a low blood sugar, such as shakiness or irregular heartbeats. When this happens, the risk of severe, life-threatening hypoglycemia increases.

Ifsome one have diabetes, episodes of low blood sugar are uncomfortable and can be frightening. Fear of hypoglycemia can cause to take less insulin to ensure that  blood sugar level doesn't go too low. This can lead to uncontrolled diabetes.

Arsenicum album – treats exhaustion and mental fatigue.
Adenosine-tri-phosphat– it is indicated for energy stabilization.
Nux vomica – it is indicated hypoglycemia signs and symptoms and food cravings.
Oenothera biennis – it regulates sugar metabolism.
Saccharum – it is indicated to reverse the addictive properties.