Hydrocephalus is also known as water on the brain, it's refers to a condition in which there is too much build up of cerebrospinal fluid (CSF) . The term hydrocephalus is derived from the Greek words "hydro" meaning water and "cephalus" meaning the head. 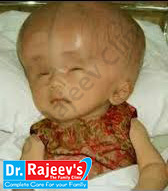 CSF is in constant circulation within the ventricles of the brain and serves many crucial functions: 1) it acts as a "shock absorber" for the brain and spinal cord; 2) it acts as a vehicle for delivering nutrients to the brain and removing waste from it; and 3) it flows between the cranium and spine to regulate changes in pressure.

When CSF builds up around the brain, it can create harmful pressures on the tissues of the brain confined within the skull. The accumulation of CSF occurs due to either an increase in production of the fluid, a decrease in its rate of absorption or from a condition that blocks its normal flow through the ventricular system.

Hydrocephalus can occur at any age, but is most common in infants and adults age 60 and older. According to the National Institute of Neurological Disorders and Stroke (NINDS), hydrocephalus is believed to affect approximately one to two in every 1,000 children born in the U.S. The majority of these cases are often diagnosed before birth, at the time of delivery or in early childhood.

In Some cases of hydrocephalus are present at birth, while others develop in childhood or adulthood. Hydrocephalus can be inherited genetically, may be associated with developmental disorders, like spina bifida or encephalocele, or occur as a result of brain tumors, head injuries, hemorrhage or diseases such as meningitis. Based on onset, presence of structural defects or high vs. normal CSF pressures, hydrocephalus can be divided into categories.

Acquired Hydrocephalus: This is the type of hydrocephalus that develops at birth or in adulthood and is typically caused by injury or disease.

Congenital Hydrocephalus: It is present at birth and may be caused by events that occur during fetal development or as a result of genetic abnormalities.

Communicating Hydrocephalus: This type of hydrocephalus occurs when there is no obstruction to the flow of CSF within the ventricular system. The condition arises either due to inadequate absorption or due to an abnormal increase in the quantity of CSF produced.

Non-communication (Obstructive) Hydrocephalus: It occurs when the flow of CSF is blocked along one of more of the passages connecting the ventricles, causing enlargement of the pathways upstream of the block and leading to an increase in pressure within the skull.

Normal Pressure Hydrocephalus: It is a form of communicating hydrocephalus that can occur at any age, but is most common in the elderly. It is characterized by dilated ventricles with normal pressure within the spinal column.

Hydrocephalus Ex-vacuo: It primarily affects adults and occurs when a degenerative disease, like Alzheimer’s disease, stroke or trauma, causes damage to the brain that may cause the brain tissue to shrink.

It is a leading homeopathic medicine to manage acute cases of hydrocephalus. It is especially suited to manage hydrocephalus in children. It is prominently indicated for acute cases (of recent origin). The head appears large and the eyes are prominent in children who need it. Sometimes they have a squint in one or both the eyes. They appear very irritable and restless and may cry or scream suddenly. They are lethargic, have weakness and low energy levels. Their sleep is excessive and deep. They may have dullness in their heads and may bore their head in the pillow.  In few children, pain in the head especially the back part of the head is present. Heated sensation in the head is also noted. Nausea can attend above symptoms. They can scream sharply in sleep.  Another symptom that they may have is trembling and jerking of limbs. In some of them scanty urine or suppression of urine can accompany above symptoms. Seizures in hydrocephalus also indicate its use. It is also the best indicated medicine for hydrocephalus and meningitis.

Calcarea Carb – When Head Appears to be Too Large

Calcarea Carb is a well-indicated medicine for managing cases of hydrocephalus in which the head is too large. It mostly helps chronic cases (means present from long duration) of hydrocephalus. The children needing it may have delayed closing of fontanelles along with head enlargement. They usually have a tendency of excessive sweating over the head. They may have weight loss. They may also show delayed growth or delayed learning to talk and walk.

Cina – When Child is Very Irritable

Cina is prepared from plant Cina Maritima of family compositae. It is beneficial for children who are very irritable and cross. They may cry a lot and strike those around them. They are restless too. They also have a desire to be carried. With this they frequently turn their head from one side to another. They may cry in sleep. They may have an attending inflammation of the brain.

Helleborous – When Child Rolls Head from Side to Side

This medicine is prepared from the root of plant Helleborus Niger commonly known as Black Hellebore, Christmas Rose or snow – rose. It belongs to family ranunculaceae. Its use is considered in cases where a child rolls head side to side frequently day and night. He also screams a lot. He may have trembling hands. His eyes have a vacant look and sometimes squinting eyes may be noted. Deep sleep is another symptom that is present. Next symptoms he has is impaired vision and speech difficulty. He may have inflamed meninges too with hydrocephalus.

Phosphorus – When Child is Dull and Sleepy

This medicine is well indicated for cases where a child is dull and very sleepy. He tends to sleep all the time, has marked weakness and low energy levels, and may also vomit a lot.

Homeopathic medicine Digitalis is prepared from plant Digitalis purpurea which belongs to the family scrophulariaceae. It is indicated for children having sudden sharp cries. With this they have vomiting on eating anything. Their eyes are sunken, dim and pupils are dilated or have squint. Their head may fall backwards from weakness of neck muscles. Other symptoms that indicate its use are boring head into pillow, involuntary urination, scanty urination and loss of vision.

Calcarea  Phos is useful for both acute as well as chronic hydrocephalus cases where a child has open fontanelles. Along with hydrocephalus meningitis can be present. It is also indicated for cases of congenital hydrocephalus (present since birth).

Kali Iodatum – With Squinting of Eyes

This medicine is beneficial when squinting of eyes is present along with other symptoms. These symptoms include crying, vomiting, trembling of limbs on the left side. Sometimes seizures are present. It is also indicated for blindness in these cases.