Huntington's disease is an inherited condition that damages certain nerve cells in the brain. 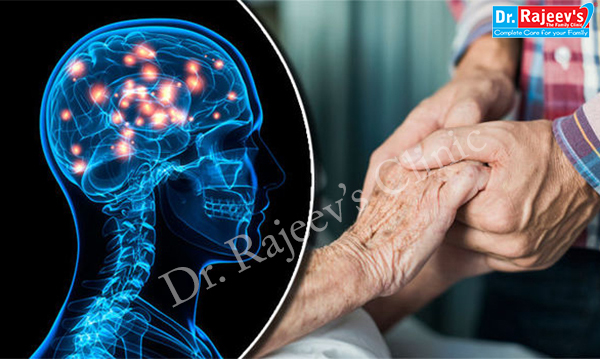 This brain damage gets progressively worse over time and can affect movement, cognition (perception, awareness, thinking, judgement) and behavior.

Early features can include personality changes, mood swings, fidgety movements, irritability and altered behavior, although these are often overlooked and attributed to something else.

Read more about the features of Huntington's disease

Huntington's disease was originally called Huntington's chorea ("chorea" is the Greek word for dancing). This is because the involuntary movements associated with the condition can look like jerky dancing. However, "disease" is now the preferred term, because the condition involves a lot more than just abnormal movements.

Huntington's disease is caused by an inherited faulty gene. However, in around 3% of cases, there's no family history of the condition, normally because the parents died at a young age.

Read more about the cause of Huntington's disease

If you have symptoms of Huntington's disease, your GP will refer you to a specialist clinician (usually a neurologist) if they feel your symptoms need further investigation.

The specialist will ask about your symptoms to assess how likely it is that you have Huntington's disease and to rule out similar conditions.

They may also test a number of physical functions, such as your eye movements, balance, control, movement and walking. Your speech and cognition may also be tested. All of these can be affected by Huntington's disease.

Genetic testing can be used to confirm the diagnosis.

Read more about how Huntington's disease is diagnosed

There's no cure for Huntington's disease and its progress can't be reversed or slowed down.

As the condition progresses, it may put a strain on family and relationships. Treatments for Huntington's disease aim to improve any mood disturbance; this is done to maintain skills used in daily living that can deteriorate over time.

Medication can help manage some of the symptoms, such as irritability or excessive movement. Therapies such as speech and language therapy and occupational therapy can help with communication and day-to-day living.

Support is also available for the family of a person with Huntington's disease. This includes, for example, testing family members who don't have any of the condition's features (manifest) to see whether they carry the gene, or help with choosing a suitable care home in advanced cases.

Huntington's disease usually progresses and gets worse over a 10 – 25 - year period from when it first appears, before the person eventually dies from it. During the condition's later stages, the person will be totally dependent and need full nursing care.

Death is usually from a secondary cause, such as heart failure, pneumonia or another infection.

Who's affected by Huntington's disease:

Both men and women with a family history of Huntington's disease can inherit the condition. Symptoms usually start to appear during adulthood.

It was previously thought that 4-6 people in a population of 100,000 were affected by Huntington's disease. However, UK research carried out in 2012 found the actual figure for those affected by the condition to be about 12 people per 100,000.

It's thought that the number of people who have the Huntington's gene and are not yet affected is about twice that of those who have symptoms.

The clinical features of Huntington's disease can include psychiatric problems and difficulties with behavior, feeding, communication and abnormal movements.

People can start to show the features of Huntington's disease at almost any age, but most will develop problems between the ages of 35 and 55.

The condition usually progresses and gets worse for around 10-25 years, until the person eventually dies. Signs and symptoms may vary between individuals and there's no typical pattern.

Early features, such as personality changes, mood swings and unusual behavior, are often overlooked at first and attributed to something else.

Some people with Huntington's disease may not recognize that they have any problems.

Behavioral changes are often the first features to appear in Huntington's disease and can be the most distressing. These changes often include:

A person with Huntington's disease may appear to have a lack of drive, initiative and concentration, making them seem lazy. However, this isn't the case – it's just the way the condition affects the brain. As part of this, they may also develop a lack of interest in hygiene and self-care.

Many people with Huntington's disease have depression. This occurs as part of the condition, not just as a response to the diagnosis. Symptoms of depression include continuous low mood, low self-esteem, a lack of motivation or interest in things, and feelings of hopelessness.

A few people may also develop obsessive behaviors and schizophrenic-like problems, although this is relatively rare.

Studies have shown that people with Huntington's disease are more likely to consider suicide, particularly near the time of diagnosis when the condition is becoming apparent, and when they start to lose their independence.

Huntington's disease affects movement. Early features include slight, uncontrollable movements of the face, and jerking, flicking or fidgety movements of the limbs and body. These move from one area of the body to another and can cause the person to lurch and stumble.

These features are often first seen when the person is walking or resting (sitting in a chair or lying in bed).

As the condition progresses, the uncontrollable movements will become more frequent and extreme. However, over time this may change and in the advanced stages of the condition a person's movements may become slow and their muscles more rigid.

People with Huntington's disease tend to lose weight, despite having a good appetite. They can find eating tiring, frustrating and messy because the mouth and throat muscles don't work properly, due to the loss of motor control. In some cases, this can lead to choking and recurrent chest infections.

Loss of coordination can lead to spilling or dropping food. Swallowing is a problem, so choking on food and drink, particularly thin drinks such as water, can be a common problem.

A referral to a dietitian or a speech and language therapist may be necessary if there are difficulties with swallowing. In some cases, a feeding tube can be inserted.

Huntington's disease is caused by a faulty gene that runs in families.

Genes are the instructions for making all parts of the human body and brain. They're made up of DNA and packaged onto strands called chromosomes. We have two copies of all our genes, so our chromosomes are in pairs.

The normal copy of the gene produces a protein called huntingtin, but the faulty gene contains an abnormal region of what are called CAG repeats. This area is larger than normal and produces a mutant form of huntingtin.

Cells in parts of the brain – specifically, the basal ganglia and parts of the cortex – are very sensitive to the effects of the abnormal huntingtin. This makes them function poorly and eventually die.

The brain normally sends messages through the basal ganglia and cortex to control movement and thinking, as well as motivation. If this part of the brain is damaged, it causes problems with control of movement, behavior and thinking.

It's still unclear exactly how abnormal huntingtin affects the brain cells and why some are more sensitive than others.

However, it's very difficult to predict how old the child will be when they develop the condition if they inherit the abnormal gene, unless it contains a very long CAG repeat (>55).

There's also a 50:50 chance that the child with Huntington's disease will pass the faulty gene on to a child they may have in the future. This pattern of inheritance is called "autosomal dominant".

In around 3% of cases of Huntington's disease, there's no obvious family history of the condition. This could be due to adoption or because relatives with the condition died early from other causes. In rare cases, it's due to a new expansion in the gene.

If you have features of Huntington's disease, your GP will refer you to a clinician with specialist expertise in the condition if they feel further investigation is needed.

Many areas have Huntington's disease management clinics with a range of specialists, including a neurologist (a doctor who specializes in conditions that affect the brain and spinal cord).

The specialist will ask about your symptoms, such as whether you've had recent emotional problems, to see if it's likely you have Huntington's disease and to rule out similar conditions.

They may also examine you and test your thinking, eye movements, balance, walking, and whether you have any involuntary movements, such as chorea (fidgety or jerky movements).

People with Huntington's disease often start to experience symptoms a number of years before the condition is actually diagnosed. This is particularly true in cases where someone is unaware that the condition runs in their family.

If you're showing features of Huntington's disease and it's known to run in your family, or if your doctor strongly suspects that you have the condition, genetic testing can be carried out to confirm the diagnosis.

It's important to realize that the diagnosis is based on the doctor recognizing a combination of a number of factors – neurological examination, family history and genetic testing. It's possible to have the gene change and still be healthy. This is known as "premanifest Huntington's disease".

You can ask your GP or neurologist to arrange an appointment for you at a regional genetic clinic. You'll receive some counselling and then blood samples will be taken. Your DNA will be extracted from the blood samples and analyzed to see whether you have inherited the faulty gene.

You may have to wait two to four weeks for the test results.