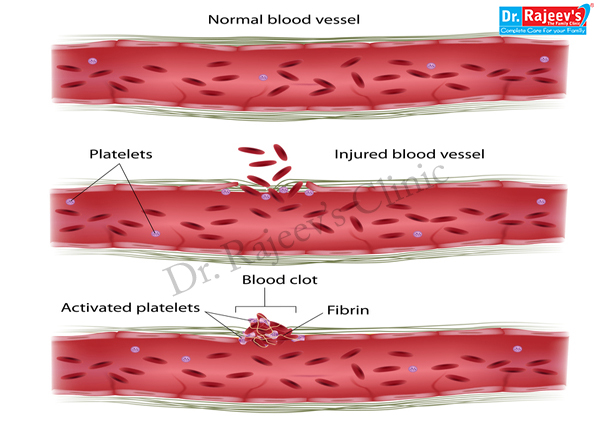 Hemophilia is an X linked genetic disorder caused as a result of the deficiency of factor VIII (hemophilia A) or factor IX (hemophilia B). It is a bleeding (coagulation) disorder wherein the body impairs its ability to control the clotting of blood (stopping blood after a blood vessel is cut).

Hemophilia is derived from the Greek word “Haemophilia” where haema means blood and philia mean love.

Incidence- Boys are more likely to get affected because of its X linked nature. As males have two X chromosomes they are likely to inherit and show symptoms. Whereas females have only one X chromosome hence they usually remain carriers of Hemophilia without any symptoms.

Signs and symptoms of Hemophilia

Hemophiliacs are prone to contract any infections like frequent cold and cough more easily compared to the normal individuals.

When we bleed, our body normally pools blood cells together to form a clot to stop the bleeding. The clotting process is encouraged by certain blood particles. Hemophilia occurs when you have a deficiency in one of these clotting factors.

There are several types of hemophilia, and most forms are inherited. However, about 30% of people with hemophilia have no family history of the disorder. In these people, an unexpected change occurs in one of the genes associated with hemophilia.

Acquired hemophilia is a rare variety of the condition that occurs when a person's immune system attacks clotting factors in the blood. It can be associated with:

Certain studies by hematologists have shown the efficacy of homeopathy for the management of Hemophilia. There are various homeopathic remedies, which prove to be useful in controlling the bleeding tendencies in hemophilia. These homeopathic medicines have an affinity for the act on the blood vessels, capillaries and help in accelerating the healing mechanism. They create varied pathogenesis in the major arteries and veins of the body causing hemorrhage, oozing, effusions and delayed healing and prolonged clotting time when taken in their crude (raw) doses.

They are known to stimulate the factors in the blood vessel in order to facilitate the healing process and stop bleeding.

Homeopathy in the treatment of hemophilia can be given as a supportive line of treatment, especially in long-standing cases. However acute exacerbations can be tackled with the conventional line of treatment. It has a good scope in homeopathy as it reduces the dependency on clotting factor concentrates which are expensive and maybe not affordable by every individual.

There is no threat of any side effects due to the long-term homeopathic treatment. It is easy and safe to take homeopathic medications for a long time. These medications act at the immunity level. The immune system is boosted in order to avoid the recurrence of infections which occurs frequently in hemophiliacs. Cold and cough is a common entity found which can be taken care of with a correctly selected homeopathic remedy.

It can be concluded that homeopathy has a good scope in treating various parameters and presentation of hemophilia through an individualistic approach. Homeopathy assures to improve the quality of life of the patient and also help patients to lead an independent life by further increasing the life expectancy.