Emaciation is condition in which a person suffers from severe nutritional deficiency, due to which the body becomes very lean, almost to the point of skin and bones.

Emaciated people are extremely then and there is almost no observable flesh anywhere on the body.

The emaciated body actually looks like someone who has been long tortured and kept away from food. The 'leaness' could arise due to malnutrition or due to any other disorder. 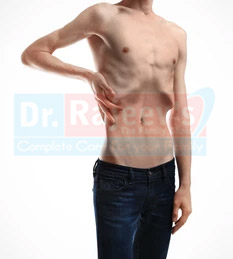 Emaciation is indicative of several dietary deficiency diseases. Hence there are different types of emaciations based on the dietary factors causing it.

1. Kwashiorkor - It is seen in children who have been weaned from mother's milk but their diet is deprived of proteins. It leads to
emaciation of the upper part of the body, but the abdomen bloats up due to ascites. Oedema is observed and hair of the child becomes
grey blond, and the face is rounded.

2. Marasmas - Marasmas occurs in children who are deficient in proteins, carbohydrates, as well as fats. It reduces the circumference of the arms and limbs of the child. The emaciation is severe and the height and weight both are below normal values.

3. Beri beri- It is caused due to prolonged deficiency of vitamin B1 i.e.Thiamine. It is seen in people eating polished rice. Here the emaciation is not very much but there is severe weakness.

4. Pellagra- It is caused due to prolonged deficiency of vitamin B3 i.e. Niacin. It is observed in people eating maize. Here the emaciation is less but there is extreme weakness, even leading to death.

Nutritional deficiency- It refers to the general deficiency of food, which causes severe emaciation. People who starve for longer
periods of the time develop this.

Protein energy Malnutrition - Pem has been identified as major health and nutrition problem in India.

Calcearea Phos : It is an excellent remedy for marasmus. The skin withers out. Skin dry and wrinkled.

Tuberculinum : This must be administered as an inter-current remedy for emaciation. It should be repeated in 200 dilution every month, no other medicine to be given for three days before and after this remedy.

Iodium : When the child is irritable and does not like to be approached by any one. Eats ravenously yet emaciated.

Aurum Mur : Emaciation due to syphilis.