Twelve nerves (called cranial nerves) from the brain control the major activities of the head, face, and neck; including the vision, hearing, smell, taste, sensations, and more. One of the twelve cranial nerves is called Trigeminal Nerve since it has three (tri) branches.

Trigeminal neuralgia (TN) is an inflammation of the trigeminal nerve which is the fifth cranial nerve arising from the brain. It causes episodes of severe, sharp, electric shock-like pain in areas of the face where branches of the nerve are distributed such as the lower jaw, upper jaw, nose, lips, forehead, eyes, and scalp.

Trigeminal neuralgia is the most painful condition known to the human race and can also lead to suicidal thoughts or depression in some patients due to its intense pain. 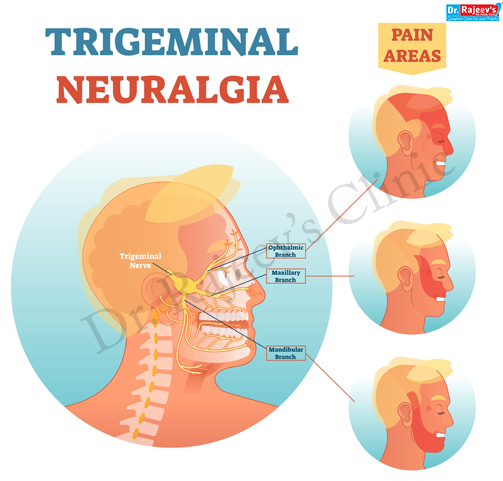 The exact cause of trigeminal neuralgia is not yet fully understood, however, in many cases, it has been observed the loss of covering (myelin sheath) over the nerve gives rise to the severe pain. It may occur due to an abnormal compression of the nerve by a blood vessel in the brain, trauma to the nerve caused by an injury or during the dental treatment, multiple sclerosis, and tumors around the nerve are some other causes.

The patient may experience frequent episodes of sharp intense pain at every few hours or every few seconds. In between the episodes, the pain is completely relieved and the person would not experience any symptoms. In some patients, the pain is constant dull aching, burning affecting either the right or left side of the face.

The conventional line of treatment comprises the use of anti-convulsive medicines, such as carbamazepine, phenytoin, and gabapentin, baclofen, which help most of the patients. However, they are habit forming and need to be continued for months to many years at the cost of several adverse effects.

Trigeminal neuralgia is a chronic and difficult condition to treat, and one always needs a supplemental treatment along with conventional medicines to manage the case in the better way. No single system of medicine is adequate to manage this severe painful disease.

Spigelia: Spigelia markedly affects the nervous system, particularly the Trigeminal nerve. It positively influences the heart, eyes and the head. A few of its characteristic symptoms are as follow :  Stabbing pains which make the patient shudder. Pains come suddenly and go suddenly. Violent tearing, burning, jerking pains in individuals who are very sensitive to touch.

Staphysagria : It is one of the most frequently used medicines for trigeminal neuralgia.

Cinchona officinalis (China ): China is frequently used in the treatment of neuralgic pains. there is marked debility in the patient due to the loss of vital fluids. The patient is weak and nervous and oversensitive to pain. Periodicity of the complaints is marked with complaints recurring every alternate day and symptoms getting invariably worse at night. Pains are worse from touch, draft of air and from jerky movements.