A runny nose is excess nasal drainage. It may be a thin clear fluid, thick mucus or something in between. The drainage may run out of nose, down the back of the throat or both. 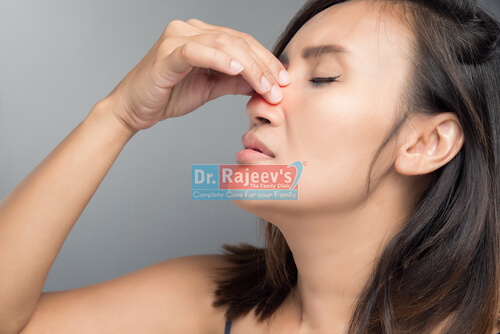 The terms "rhinorrhea" and "rhinitis" are often used to refer to a runny nose. Rhinorrhea actually refers to a thin, mostly clear nasal discharge. Rhinitis refers to the inflammation of nasal tissues. Rhinitis often results in a runny nose.

If someone have a runny nose, he/she may or may not also have nasal congestion.

A runny nose can be caused by anything that irritates or inflames the nasal tissues. Infections such as the common cold and influenza allergies and various irritants may all cause a runny nose. Some people have a chronically runny nose for no apparent reason a condition called nonallergic rhinitis or vasomotor rhinitis.

Less commonly, a runny nose can be caused by polyps, a foreign body, a tumor or migraine-like headaches.

Useful for rhinorrhoea when there is thin watery discharge from the nose with burning sensation.Also useful for recurrent sneezing one after another with runny nose. There is burning and tearing of eyes . There is puffiness around eyes, stuffy nose.Very useful when person has an asthmatic tendency with breathing difficulties, and oppression of chest which is generally worse when he lies down. On sitting with a forward bending posture makes the patient little comfort from his asthmatic problem. There is marked wheezing sound during asthmatic affection.Useful when asthma is worse in wet cold weather.

Useful for rhinorrhoea when there is itching with redness of eyes in allergic condition. The itching is followed by burning sensation and relieved by cold applicationUseful when person is irritable, depressed, thin and weak, but with good appetite.  There is feeling of congestion or oppression of chest in asthmatic condition.

Useful for rhinorrhoea when there is more itching of nose, throat, ear with recurrent sneezing one after another. Useful for the discharge which is watery or thick whitish, like the white of an egg.There is  desire to take extra salt in his diet.

Useful for rhinorrhoea with spasmodic sneezing one after another.Very useful for symptoms of hay-fever or allergic rhinitis with itchy nose and fluent coryza. There is runny nose with severe frontal headache and redness of eyelids.

Useful for rhonoroea with severe runny nose that drips from the tip of nose with watery eyes. There is burning of nose due to over secretion mucous. Along with the watery nasal discharge there is watery eye. There is profuse sneezing associated with runny nose and watery eyes.