Nystagmus is a vision condition in which the eyes make repetitive, uncontrolled movements. These movements often result in reduced vision and depth perception and can affect balance and coordination. It is the sign of disease of either the ocular or the vestibular system and its connection.

There are two types of nystagmus: congenital and acquired. 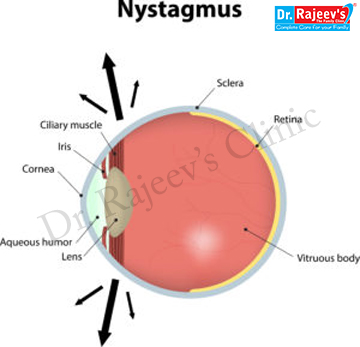 This type of nystagmus starts in infants, usually between 6 weeks and 3 months old. Children with this condition tend to have it in both eyes, which move side to side. Usually doctors do not know what is causing the child’s condition. Sometimes it is inherited (passed down from parents to children).

Children with nystagmus typically do not see things as “shaking.” Instead, they may have some blurry vision.

This condition happens later in life. It has many causes, including serious medical conditions or drug and alcohol use.

Nystagmus can be related to the following:

The main symptom of nystagmus is rapid eye movement that cannot be controlled. Usually the movement is side to side. It can also be up and down or circular. The movement can vary between slow and fast, and it usually happens in both eyes.

In addition to rapid eye movement, nystagmus symptoms include:

AGARICUS MUSCURIS-Useful for nystagmus accompanied with marked and persistent vertigo with a constant impulse to fall backward.There is twitching of eyelids and facial muscles.Given when there is difficulty in reading as the type seems to move or swim,There is double vision, dim and flickering of eyes.Useful for

CUPRUM MET-Useful for nystagmus with convulsions and cramps of violent form.There is aching over the eyes.Given when eyeballs rotate quickly behind closed lids or roll from side to side.There is bruised pain in the orbits, worse moving the eyes.

CICUTA VIROSA- Useful for nystagmus with spasmodic movements after a fall or blow, letters go up and down or disappear when reading. Useful for the effects of exposure to snow, eyes roll, jerk and stare. Eyelids twitch.

ZINCUM MET-Useful for nystagmus with blurring of one half of vision, worse stimulants. There is squinting, itching and soreness of lids and inner angles.Useful when accompanied by restless feet, which are in continous motion unable to keep them still.