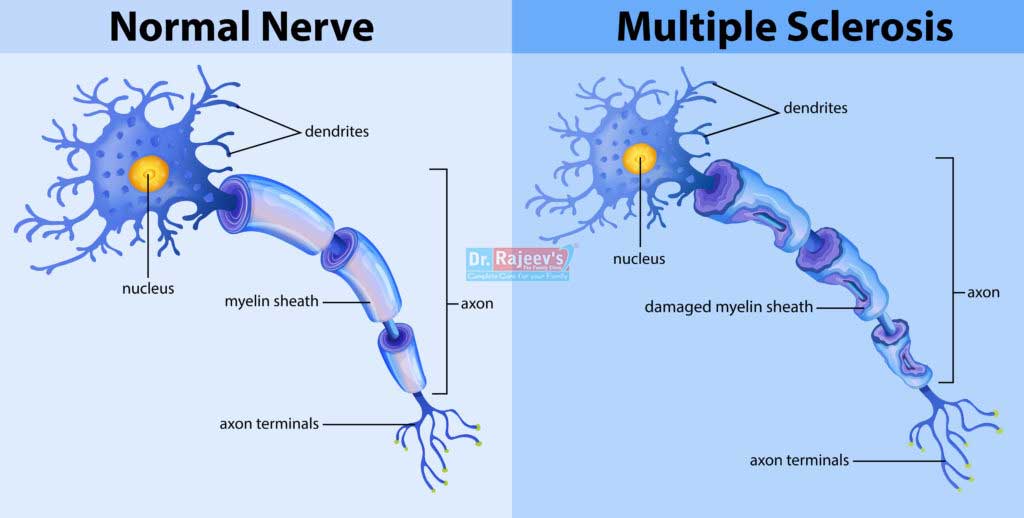 In MS, the immune system attacks the protective sheath (myelin) that covers nerve fibers and causes communication problems between the brain and the rest of our body. Eventually, the disease can cause permanent damage or deterioration of the nerves.

Signs and symptoms of MS vary widely and depend on the amount of nerve damage and which nerves are affected. Some people with severe MS may lose the ability to walk independently or at all, while others may experience long periods of remission without any new symptoms.

Multiple sclerosis signs and symptoms may differ greatly from person to person and over the course of the disease depending on the location of affected nerve fibers. Symptoms often affect movement, such as:

Vision problems are also common, including:

Multiple sclerosis symptoms may also include:

The cause of multiple sclerosis is unknown. It's considered an autoimmune disease in which the body's immune system attacks its own tissues. In the case of MS, this immune system malfunction destroys the fatty substance that coats and protects nerve fibers in the brain and spinal cord (myelin).

Myelin can be compared to the insulation coating on electrical wires. When the protective myelin is damaged and nerve fiber is exposed, the messages that travel along that nerve may be slowed or blocked. The nerve may also become damaged itself.

It isn't clear why MS develops in some people and not others. A combination of genetics and environmental factors appears to be responsible.

Picric Acid -Useful for multiple sclerosis where patients feel pin and needle pricks in their limbs. There is feeling of  tiredness and heaviness.There is marked prostration, muscle weakness and spasms from multiple sclerosis.Very useful when weakness may worsen with exertion. There is also burning sensation along the spine.

Conium - Useful medicines for weak lower limbs due to multiple sclerosis. There is weak and weary legs.Useful when there is sudden loss of strength while walking.Useful for difficult gait and stiffness in legs.

Argentum Nitricum -Useful for mutiple sclerosis when there is weakness in calf muscles.There is rigidity in calves.Very useful for unsteady walk.There is heaviness of limbs where the limbs feel as if they were made of wood. Also useful in trembling of legs.

Lathyrus Sativus -Very useful medicine for multiple sclerosis where spasticity is most marked in the legs. There is extremely rigid feeling of leg, with a spastic gait. There is trembling or tottering while walking. Also useful for cramps in the legs.