when a persons have intense malaise, fever, rigors, severe headache, photophobia and vomiting,irritable and prefers to lie still.There may also has neck stiffness  which subsequently develops a positive kernigs sigh.This condition is called MENINGITIC SYNDROME.

In meningitis, the infection can be caused by bacteria, viruses or fungi. In meningococcal infection, there will be a  petechial rash; in pneumococcal infection there is often a skull fracture, ear disease or a congenital central nervous system lesion. Leptospirosis is responsible in case working in drains, canals, polluted rivers, etc.

Acute bacterial meningitis is recognized by its sudden onset, rigors and high fever. A petechial rash may be present which is a strong evidence 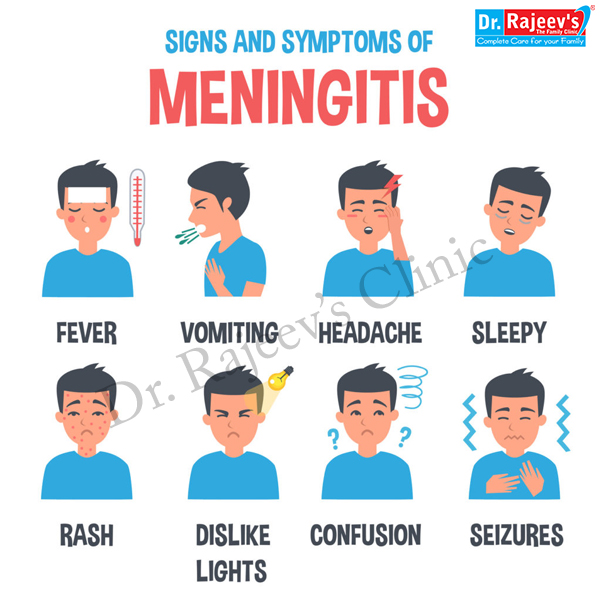 of the disease. Viral meningitis is a benign, self-limiting condition lasting for about 4-10 days. Headache may follow but there are no sequalae. Tubercular meningitis causes meningitis commencing with vague headache, lassitude, anorexia and vomiting. Meningitic signs may appear after a few days or weeks.

Viral meningitis in infants may cause:

In adults, viral meningitis may cause:

Bacterial meningitis symptoms develop suddenly. They may include:

Symptoms of fungal meningitis resemble the other types of this infection. These may include:

Viral meningitis is the most common type of meningitis.

The most common types of bacteria that cause bacterial meningitis are:

Fungal meningitis is a rare type of meningitis. It is caused by a fungus that infects our body and then spreads from our bloodstream to our brain or spinal cord.

People with a weakened immune system are more likely to develop fungal meningitis. This includes people with cancer or HIV.

The most common funguses related to fungal meningitis include:

This type of meningitis is less common than viral or bacterial meningitis, and it is caused by parasites that are found in dirt, faeces, and on some animals and food, like snails, raw fish, poultry, or produce.

One type of parasitic meningitis is rarer than others. It is called eosinophilic meningitis (EM). Three main parasites are responsible for EM. These include:

Non-infectious meningitis is not an infection. Instead, it is a type of meningitis that’s caused by other medical conditions or treatments. These include:

Each type of meningitis has a slightly different cause, but each ultimately acts in the same way: A bacterium, fungus, virus, or parasite spreads through the bloodstream until it reaches the brain, or spinal cord. There, it sets up in the lining or fluids around these vital body parts and starts developing into a more advanced infection.

Non-infectious meningitis is the result of a physical injury or other condition; it doesn’t involve an infection.

Useful for nervous, restless and oversensitive or hot, or drowsy with or without thirst.There is boring of head backward into the pillow,cannot hold the head up.There is stinging pains.There is thirst during chill,burning heat but feels chilly when moved.Useful for stupor with sudden short cries. There is great fidgetiness.There is stiffness is accompanied by a feeling of constriction.

Useful for meningitic syndrome with stupor and dullness of sensorium.There is rolling of the head  constantly, patient bores the head into the pillow for relief headache. There is also rigidity of the neck with stiffness.

Useful for meningitic syndrome with headache, beginning in the occiput which spread over the whole head, setting over the eyes.There is dizziness and dim vision rising from the occiput over the head.Useful for headache  accompanied with stiffness of the neck which is worse in the morning and better urinating.There is difficulty in keeping the eyes open.Mostly indicated in the congestive stage of meningitis with pain at the back of the head and dilated piupils.

Useful for congestive headache with tendency to incoherent talking patient raises the head frequently with tendency from the pillow and drops it again during unconsciousness and delirium.Useful for pain in the forehead and over the eyebrows beginning at 9 am in the morning, worse till noon.Useful for meningitis from suppressed ear discharges.