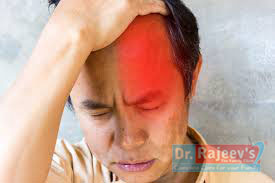 Cluster headaches, which occur in cyclical patterns or cluster periods, are one of the most painful types of headache. A cluster headache commonly awakens people in the middle of the night with intense pain in or around one eye on one side of the head.

Bouts of frequent attacks, known as cluster periods, can last from weeks to months, usually followed by remission periods when the headaches stop. During remission, no headaches occur for months and sometimes even years.

A cluster period generally lasts for several weeks to months. The starting date and the duration of each cluster period might be consistent from period to period. For example, cluster periods can occur seasonally, such as every spring or every fall.

During a cluster period:

The pain usually ends as suddenly as it began, with rapidly decreasing intensity. After attacks, most people are pain-free but exhausted.

People with cluster headache, unlike those with migraine, are likely to pace or sit and rock back and forth. Some migraine-like symptoms — including sensitivity to light and sound — can occur with a cluster headache, though usually on one side.

Unlike migraine and tension headache, cluster headache generally isn't associated with triggers, such as foods, hormonal changes or stress.

Once a cluster period begins, however, drinking alcohol may quickly trigger a splitting headache. For this reason, many people with cluster headache avoid alcohol during a cluster period.

Very useful for cluster Headache when there is severe pain around the eye at a particular hour. There is periodicity in occurrence of periorbital pain which may radiate into the ear. In other persons, the pain around the eye may radiate to the temples or back of head. Also useful for watering from eyes with burning  with eye pain. There  pain may appear on any side but more useful when the pain over the left side of eye is felt more often.

Useful for cluster Headache with redness or swelling of eyes and flushing of face. There is deep pain in the eyes, mostly throbbing or shooting in nature, with congestion and redness of eyes. The eyes also show protrusion. Photophobia i.e.There is intolerance to light or worsening of pain from light may also be noted. very useful when lying down worsens the pain and tight bandage or pressure seems to provide relief. There is sudden onset of a violent headache  The attacks appear suddenly and with intensity and leave with the same suddenness.

useful for left-side Cluster Headache. There is a severe violent pain around the eye and in the eye socket specifically on the left side. The eyeballs too appear large. There is digging, boring, shooting, violent, throbbing or stitching pain, with a feeling of needles pricking in the eye on the left side. There is pain in eye on moving or turning the eye.There is pain with redness of eyes with sensitivity to light and dropping of eyes also show their presence.

Useful for right-side Cluster Headache.Useful for pain settles over or around the right eye.There is  bursting sensation with a feeling as if the eyes will be pressed out.There is periodicity of pain is noted mostly with beginning of pain in morning and continuing till evening.