Bulimia nervosa is an eating disorder and mental health condition.

People who have bulimia try to control their weight by severely restricting the amount of food they eat, then binge eating and purging the food from their body by making themselves vomit or using laxatives. 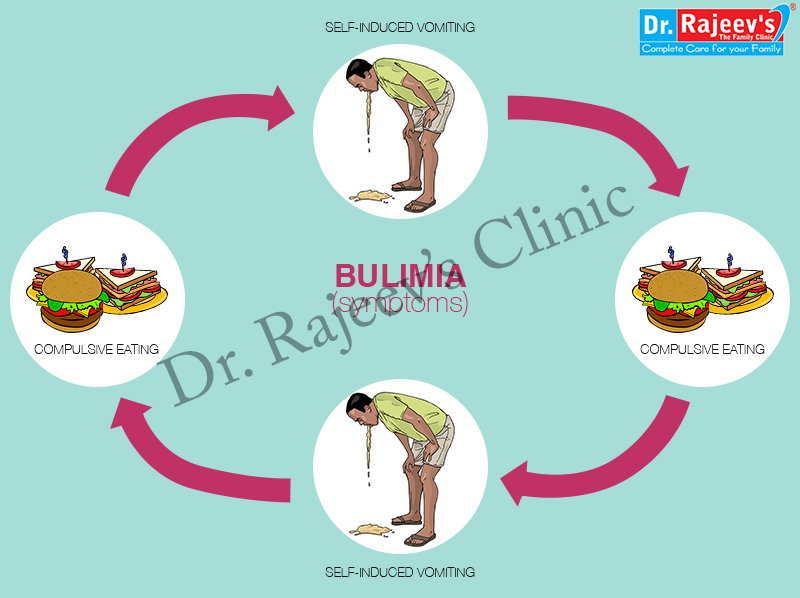 As with other eating disorders, bulimia nervosa can be associated with:

Eating disorders are often associated with an abnormal attitude towards food or body image.

Everyone has their own eating habits – for example, people with a food intolerance need to avoid eating certain foods to stay healthy. However, people suffering from eating disorders tend to use their eating habits and behaviours to cope with emotional distress, and often have an abnormal or unrealistic fear of food, calories and being fat.

Because of this fear, people with bulimia nervosa tend to restrict their food intake. This results in periods of excessive eating and loss of control (binge eating), after which they make themselves vomit or use laxatives (purging). They purge themselves because they fear that the binging will cause them to gain weight, and usually feel guilty and ashamed of their behaviour. This is why these behaviours are usually done in secret.

Such binge-purge cycles can be triggered by hunger or stress, or are a way to cope with emotional anxiety.

Signs of bulimia nervosa include an obsessive attitude towards food and eating, an overcritical attitude to their weight and shape, and frequent visits to the bathroom after eating, after which the person might appear flushed and have scarred knuckles (from forcing fingers down the throat to bring on vomiting).

As with all eating disorders, women are much more likely to develop bulimia than men.

However, bulimia nervosa is becoming increasingly common in boys and men. There are an estimated 1.6 million Britons suffering from some form of eating disorder, and reports estimate that up to 25% may be male.

Recent studies suggest that as many as 8% of women have bulimia at some stage in their life. The condition can occur at any age, but mainly affects women aged between 16 and 40 (on average, it starts around the age of 18 or 19).

Bulimia nervosa can affect children, but this is extremely rare.

There are also many support groups and charities you can approach for help, including:

The first step towards getting better is to recognise the problem and to have a genuine desire to get well.

There is strong evidence that self-help books can be effective for many people with bulimia nervosa, especially if they ask a friend or family member to work through it with them.

If this is not suitable or is unsuccessful, your GP can refer you for treatment to an eating disorder service, where you may be offered a structured programme of cognitive behavioral therapy (CBT). Some people may also benefit from antidepressant medication (fluoxetine), as this can reduce the urges to binge and vomit.

The main signs of bulimia are binge eating and purging (ridding your body of food by making yourself vomit or taking laxatives).

There may also be psychological symptoms, such as:

Without treatment, bulimia can lead to a number of physical complications.

Binge eating is repeatedly eating vast quantities of high-calorie food, without necessarily feeling hungry or needing to eat. The urge to eat can begin as an attempt to deal with emotional problems, but can quickly become obsessive and out of control.

Binge eating is usually a very quick process and you may feel physically uncomfortable afterwards. When binge eating is a symptom of bulimia, it happens regularly, not just once or twice.

Binge eating episodes are sometimes spontaneous, where you eat anything you can find. They can also be planned, where you make a shopping trip to buy foods specifically to binge on.

Purging is a response to binging. After you have eaten lots of food in a short space of time, you may feel physically bloated and unattractive. You may also feel guilty, regretful and full of self-hatred.

However, the main impulse to purge is a powerful, overriding fear of putting on weight.

The most common methods of purging involve making yourself vomit or using laxatives to encourage your body to pass the food quickly.

Bulimia is often a vicious circle. If you have the condition, it is likely that you have very low self-esteem. You may also think you are overweight, even though you may be at or near a normal weight for your height and build.

This may encourage you to set yourself strict rules about dieting, eating or exercising, which are very hard to maintain. If you fail to keep to these strict rules, you binge on the things that you have denied yourself. After feeling guilty about binging, you purge to get rid of the calories.

There is no simple answer to the question of what causes bulimia. Although the condition is linked to a fear of getting fat, more complex emotions usually contribute.

The act of binging and purging is often a way of dealing with these intense emotions.

Common problems that may lead to bulimia include:

Bulimia is often linked to other psychological problems. Research shows that bulimia is more common in people who have:

Some people believe that the media and fashion industries create pressure for people to aspire to low body weights.

Many young people become affected by eating disorders around the time of puberty, when hormonal changes can make them more aware of their body.

If teenagers feel they have no say in their lives, bulimia can seem like the only way to take control.

There may be a genetic factor related to developing bulimia. Research suggests that people who have a close relative who has or has had bulimia are four times more likely to develop it than those who do not have a relative with the condition.

The causes of bulimia in men can be slightly different. In many cases, bulimia develops because of bodybuilding or specific occupations like athletics, dancing or horse racing.

However, like many women, younger men are increasingly becoming more vulnerable to disliking their bodies and being bullied or teased as children for being overweight.

If you have an eating disorder such as bulimia, the first step is to recognise that you have a problem and visit your GP. You may think it is not serious, but bulimia can damage your long-term health.

Accepting that you need help and support is the first step to recovery, but this may be a very difficult step for you to take. Most people who have bulimia hide their situation for months or years before seeking help. It can often take a change of situation, such as the start of a new relationship or living with new people, to make a person with bulimia want to seek help.

It may help to make a list of questions you want to ask before you see your GP. Once you have explained your situation to your GP, they will decide whether to refer you to a specialist mental health team.

Your local team will include:

Your treatment depends on how serious your condition is and the best way to manage it. Your GP may recommend a self-help programme to start your recovery before referring you for specialist treatment.

You can make a full recovery from bulimia. The earlier you start treatment, the quicker the recovery process will be.

Do I have an eating disorder?

Doctors sometimes use a questionnaire called the SCOFF questionnaire to help recognise people who may have an eating disorder. This involves answering the following five questions:

You can recover from bulimia, but it may be a long and difficult process. The first step towards getting better is to recognise the problem and have a genuine desire to get well. This may involve a big change in lifestyle and circumstances.

If you are concerned about a friend or family member, it can be difficult to know what to do. It is common for someone with an eating disorder to be secretive and defensive about their eating and their weight, and they will probably deny being unwell.