Warts are actually benign tumors of the epidermis caused by a virus. The virus responsible is the human papillomavirus (HPV), a double-stranded DNA virus. The virus resides in the bottom layer of the epidermis and replicates into almost normal-looking skin. Different sub-types of HPV cause different types of warts. Some human papillomavirus subtypes also cause cervical cancer and other more obscure types of wart-related cancers.

The Appearance of Warts

Warts normally grows out of the skin in cylindrical columns. These columns do not fuse when the wart grows on thin skin such as the face. On thicker skin, the columns fuse and are packed tightly together giving the surface the typical mosaic pattern. Black dots can sometimes be seen in a wart. These are actually blood vessels that have grown rapidly and irregularly into the wart and have thombosed or clotted off.

Warts can occur in people of all ages, but occur most commonly in children and young adults. They spread by direct contact, simply by touching the wart. Warts normally resolve spontaneously but the time it takes for this resolution is variable. Most warts resolve within weeks or months, but some may take years. It appears that a person's susceptibility to warts and the time it takes for them to go away is related to the individual's immune system. People who have immune-related diseases such as AIDS and lymphoma, or who are taking chemotherapy tend to have more warts that last longer.

The main cause of warts is an infection by Human Papilloma Virus (HPV). This virus is generally contracted in swimming pools. There are almost 100 types of HPV virus. The Type 1, 2, and 3 causes most of the common warts. While the Type 1 HPV virus is associated with deep plantar and palmar warts, Type 2 causes common warts, filiform warts, plantar warts and mosaic plantar warts. On the other hand, Type 3 HPV virus causes plane warts, which are commonly known as flat warts.

Skin growths caused by contact with the contagious human papillomavirus, warts can spread from person-to-person or via contact with an object used by a person with the virus Prevent the spread of warts by not picking them, covering them with bandages, and keeping them dry. In most cases warts are harmless, painless, and go away on their own.

Genital warts affect both men and women and can occur at any age.

In children younger than three years, genital warts are thought to be transmitted by nonsexual methods such as direct manual contact. Nevertheless, the presence of genital warts in children should raise the suspicion for sexual abuse.

Genital warts are caused by the human papillomavirus (HPV). Over 100 types of HPVs have been identified; about 40 of these types have the potential to infect the genital area

About 90% of genital warts are caused by two specific types of the virus (HPV-6 and -11), and these HPV types are considered "low risk," having a low cancer-causing potential. Other HPV types have been strongly associated with premalignant changes and cervical cancers in women. HPV-16 is responsible for about 50% of cervical cancers, and types 16, 18, 31, and 45 together accounts for 80% of cancers

Common warts are not the same as genital warts and are caused by different HPV types that infect the skin; the viral particles are able to penetrate the skin and mucosal surfaces through microscopic abrasions in the genital area, which occur during sexual activity. Once cells are invaded by HPV, a latency (quiet) period of months to years may occur

Generally, two-thirds of people who have sexual contact with a partner who has genital warts develop them within three months

Genital warts are indirectly associated with use of birth control pills due to increased sexual contact without the use of barrier protection, multiple sex partners, and having sex at an early age. 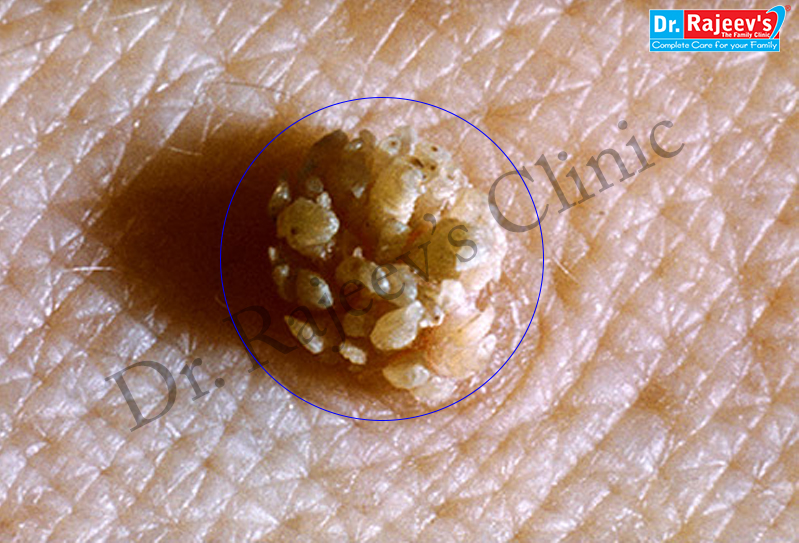 Warts usually appear as rough elevations on the skin and come in various shapes and sizes. These are most commonly seen on the fingers, elbows, knees, face, scalp and soles of the feet. Common warts occur on the backs of the hands and on the fingers. Broken skin is a common place for these warts to grow. Foot warts cause a lot of pain and make it difficult to walk. Flat warts are those that occur in large numbers, in any part of the body. Genital warts, on the other hand, are amongst the most common sexually transmitted diseases (STD) affecting people today.

CAUSTICUM : Useful for old, large warts on the face (especially the nose), under the fingernails, or warts on fingertips that bleed easily.Suited for warts which is hard, inflamed,painful and sit on whitish-yellow, dirty looking skin.There is fear that something awful will happen and feel intensely sympathetic about the hardship of others.

DULCAMARA : Useful for Flat warts located on backs of hands and face and soft brownish to black seborrheic warts found on the back. Mostly indicated in people with rheumatic complaints that are worse in cold, damp weather or humidity.

FERRUM PICRIC : Useful for small pointed warts appearing in large groups.Useful in some cases of flat or plane warts with irregular borders that grow on the face, neck, wrists, hands and knees.