Ringworm is a common skin infection that is caused by a fungus. It is called “ringworm” because it can cause a circular rash (shaped like a ring) that is usually red and itchy. Anyone can get ringworm 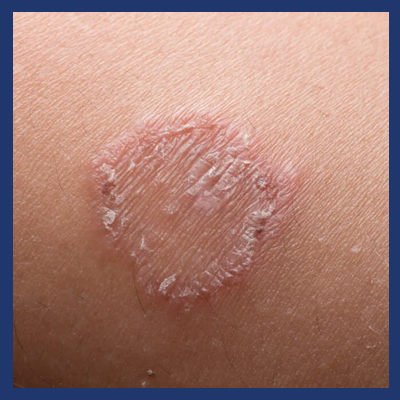 Ringworm of the bearded area of the face and neck, with swelling and marked   crusting, often with itching, sometimes causes the hair to break off. In the days when   men went to the barber daily for a shave, tinea barbae was called  barber's  itch.

Ringworm of the scalp commonly affects children,mostly in late childhood or   adolescence.This condition may spread in schools. Tinea capitis appears as scalp   scaling that is associated with bald spots (in contrast to seborrhea or dandruff, for  instance, which do not cause hair loss).

Tinea of the groin ("jock itch") tends to have a reddish-brown color and to extend from the folds of the groin down onto one or both thighs. Other conditions that can mimic tinea cruris include yeast infections, psoriasis, and intertrigo, a chafing rash which results from the skin rubbing against the skin.

When fungus affects the skin of the body, it often produces the round spots of classic ringworm. Sometimes, these spots have an "active" outer border as they slowly grow and advance. It is important to distinguish this rash from other even more common rashes, such as nummular eczema. This condition, and others, may appear similar to ringworm, but they are not due to a fungal infection and require different treatment.

Ringworm involving the hands, particularly the palms and the spaces between the fingers. It typically causes thickening (hyperkeratosis) of these areas, often on only one hand. Tinea manus is a common companion of tinea pedis (ringworm of the feet). It is also called tinea manuum.

Athlete's foot may cause scaling and inflammation in the toe webs, especially the one between the fourth and fifth toes. Another common form of tinea pedis produces a thickening or scaling of the skin on the heels and soles. This is sometimes referred to as the "moccasin distribution." In still other cases, tinea causes blisters between the toes or on the sole. Aside from athlete's foot, tinea pedis is known as tinea of the foot or, more loosely, fungal infection of the feet. Tinea pedis is an extremely common skin disorder. It is the most common and perhaps the most persistent of the fungal (tinea) infections. It is rare before adolescence. It may occur in association with other fungal skin infections such as tinea cruris (jock itch).

Ringworm on the face except in the area of the beard. On the face, ringworm is rarely ring-shaped. Characteristically, it causes red, scaly patches with indistinct edges.

Finally, fungus can make the fingernails and, more often, the toenails yellow, thick, and crumbly. This is referred to as fungal nails or onychomycosis.

Minimizing sweat and moisture can help prevent fungal infections. Common recommendations along these lines are for men to wear boxer shorts, for women to avoid panty hose, and so forth. Whether these measures, some of which are quite difficult to implement, are really worth all of the effort is open to question.

RHUSTOX : There is intense burning, itching and stinging from the fungal skin infection. Given when skin symptoms are better by heat or bathing the area in hot water.

SEPIA : There is scaly,reddish or brownish rash.Suited to person who is chilly and seeks the warmth of blankets.Useful for itching which is worse from sweating and overheating.Given when symptoms are worse with dampness but improved by fresh air.

SULPHUR : Usefull for infected scalp with severe itching and burning.

TELLURIUM : Most suitable medicicne for ringworm which mostly effect the trunk area.There is eruption which makes round patches with severe itching and redness.