The patient has hypopigmented skin patches associated with loss of sensation to touch or temperature indicating peripheral nerve involvement. There are symmetrical skin lesions, nodules and thickening of the dermis. Patient also complains of transient rash with features of acute febrile illness and occasional epistaxis. Numbness and tingling in extremeties is occasionally experienced. It is a case of LEPROSY.,

Leprosy is caused by mycobacterium leprae. It is not very contagious and has a long period of incubation. It generally presents with skin sores, nerve damage and muscles weakness which gets worse over time, leading to several complication like disfigurement, muscles weakness, sensory loss and permanent nerve damage in limbs. 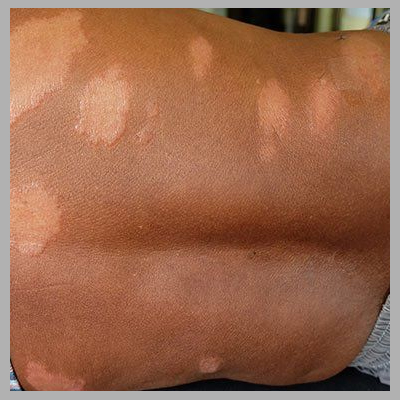 It takes more than a month or year to fully develop the clinical  picture which can have different prodromal pictures such as, an attack of fever, malaise, pain in the limbs, etc. there are two or three types of clinical expressions.

Leprosy primarily affects the skin and nerves outside your brain and spinal cord, called the peripheral nerves. It may also strike your eyes and the thin tissue lining the inside of the nose.

The main symptom of leprosy is disfiguring skin sores, lumps, or bumps that don’t go away after several weeks or months. The skin sores are pale-colored.

Nerve damage can lead to:

It usually takes about 3 to 5 years for symptoms to appear after coming into contact with the bacteria that causes leprosy. Some people do not develop symptoms until 20 years later. The time between contact with the bacteria and the appearance of symptoms is called the incubation period. Leprosy's long incubation period makes it very difficult for doctors to determine when and where a person with leprosy got infected.

It isn’t clear exactly how leprosy is transmitted. When a person with leprosy coughs or sneezes, they may spread droplets containing the M. leprae bacteria that another person breathes in. Close physical contact with an infected person is necessary to transmit leprosy. It isn’t spread by casual contact with an infected person, like shaking hands, hugging, or sitting next to them on a bus or at a table during a meal.

Pregnant mothers with leprosy can’t pass it to their unborn babies. It’s not transmitted by sexual contact either.

Leprosy is another destructive process of tubercular origin and it can cause vicious and unprecedented deformity. It occurs mostly in persons of lymphatic temperament. It is only in the tubercular miasm that we have to face so many difficulties in eradicating these conditions.

Chaulmoogra oil and its derivatives have been used effectively in treating early cases of leprosy.

Hydrocotyle asiatica has great reputation is treating leprosy when there is no ulceration. Excessive thickening of the skin with exfoliation. Copper coloured eruptions, especially on the face.

Petroleum has dirty, hard, rough skin thickened like parchment. Skin cracks and bleeds easily. Tubercles on the face and numbness of extremities.

Anacardium orientale  has insensible skin; numbness and sensation of pins and needles in affected parts which are cold. Paralytic weakness of limbs.