Impetigo is a common and highly contagious skin infection that mainly affects infants and children. Impetigo usually appears as red sores on the face, especially around a child's nose and mouth, and on hands and feet. The sores burst and develop honey-colored crusts. 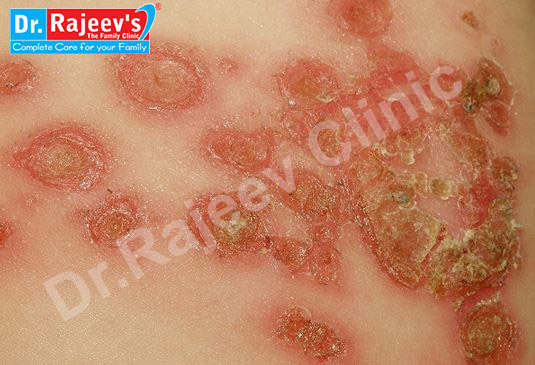 this is a less common form of the disorder , symptoms include:

this is the more serious form of impetigo

this penetrates deeper into the skin ,that causing painful fluid or pus-filled sores that turn into deep ulcers.

when we come into contact with the sores of someone who's infected or with items we've touched — such as clothing, bed linen, towels and even toys.

Factors that increase the risk of impetigo include:

Adults and people with diabetes or a weakened immune system are more likely to develop ecthyma.

Impetigo typically isn't dangerous. And the sores in mild forms of the infection generally heal without scarring.

Rarely, complications of impetigo include: 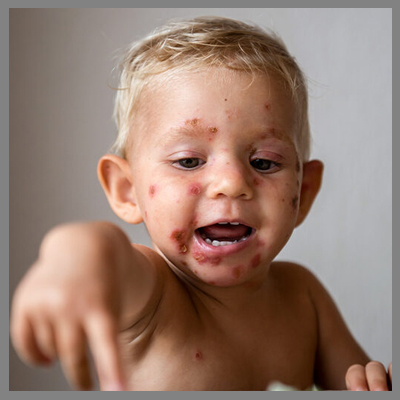 Keeping skin clean is the best way to keep it healthy.

It's important to wash cuts, scrapes, insect bites and other wounds right away.

To help prevent impetigo from spreading to others:

Mezereum is an effective homeopathic medicine used to treat impetigo in cases where there is a formation of thick crusts on the skin. It is prepared from fresh bark of a plant called Daphne Mezereum (also commonly named as Spurge Olive.) This plant belongs to the natural order Thymelaceae. The eruptions most prominently appear around the mouth with honey-like scabs. The eruptions also appear on the nose along with a pale discharge. Yellowish brown scabs form on the nose after rupturing of the eruptions. Yellow, thick pus may discharge from the sores. Sometimes the sores bleed on touch. The eruptions are itchy, and the child continually scratches them. Tearing the scabs causes pain, and there may be a burning sensation in the eruptions. The child may also be highly irritable and restless.

Graphites – Natural Medicine for Impetigo with Eruptions and Discharge

Homeopathic medicine Graphites offers a natural cure for impetigo. The chief characteristic to use Graphites in impetigo include eruptions that exude watery, transparent, sticky, gluey discharges. The eruptions at first are light – colored with itching followed by scab formation. The itching subsides once the scabs are formed. In some cases, there may be pus and discharge of watery blood from the eruptions. The discharges may be corrosive.

Antimonium Crudum is a natural homeopathic cure for impetigo in cases where the eruptions are covered with thick, hard, honey-colored scabs. The crusty eruptions are painful to touch and are usually present on the face around the lips. The discharge from the sores is greenish.

Cicuta is a natural treatment for impetigo prepared from the fresh root of a plant called Cicuta Virosa or Water Hemlock. This plant belongs to the natural order Umbelliferae. Just like Antimonium Crudum, Cicuta is also indicated for impetigo eruptions with honey-colored scabs that itch and burn. The scabs fall off and leave behind a bright red, smooth surface. The eruptions appear around the corners of mouth and hands, and may also spread to the chin. The eruptions tend to discharge yellow corrosive fluid.

Dulcamara is a safe, natural medicine for impetigo prepared from fresh green stems and leaves od a plant called Woody Nightshade or Bitter-Sweet. These are gathered just before the flowering of the plant. The natural order of this plant is Solanaceae. Dulcamara works effectively in cases of impetigo where the eruptions are covered with thick, brown – yellow crusts. The crusts are surrounded by a red colored border. These bleed when scratched and may ooze watery fluid or pus. The eruptions are itchy and sensitive to touch. There may be worsening of symptoms from washing the eruptions.