A patient complains that one or more fingers  or the toes, perhaps a part of the hand or foot are cold, appear purple and shriveled, evoke a charateristic odour and present with loss of sensation but with severe pain in the adjoining living tissue, with or without secondary infection. It is a case of GANGRENE.

Mostly two type of gangrene are known. The most common form is invariably due to an arterial block. Extremities  become white, cold and anaesthetic. Soon the part becomes painful, gradually drying and becoming mummified. As thrombosis slowly extends up the limb, the gangrene spreads until a line of demarcation  forms where adequate blood supply is available. The most common type is senile gangrene , which is due to arteriosclerosis.

When gangrene affects your skin, signs and symptoms may include:

A condition called septic shock can occur if a bacterial infection that originated in the gangrenous tissue spreads throughout  body. Signs and symptoms of septic shock include:

Gangrene may occur due to one or some of the following causes:

Several factors increase your risk of developing gangrene. These include:

Gangrene can lead to scarring or the need for reconstructive surgery. Sometimes, the amount of tissue death is so extensive that a body part, such as your foot, may need to be removed (amputated).

Gangrene that is infected with bacteria can spread quickly to other organs and may be fatal if left untreated. 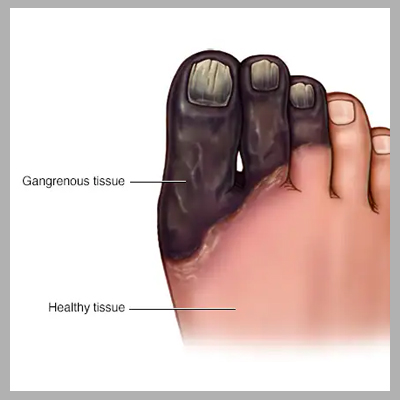 Here are a few suggestions to help you reduce your risk of developing gangrene:

Anthracinum is a nosode which is a very valuable remedy in malignant or septic inflammations of connective or cellular tissues. It forms carbuncles, abscesses, boil-like eruptions and malignant ulcers. Gangrenous ulcers; ulcers have a black base on the lower limbs and produce an offensive discharge. Gangrene from burns and scalds. Patient is restless and debilitated.

Arsenicum album is specially for diabetic gangrene. Ulcers on the heels, soles, toes and finger tips, with burning pains, relieved by heat. Pains are maddening, burning like fire, hot needles or wires. Patient is restless and complains of great sudden weakness.\

Cantharis vesicatorias action is rapid and intense. The inflammation is violently acute or rapidly destructive in the mucous and serous membrance. Tendency to gangrene ulcerative pain in soles; burning in feet at night.

Secale cornutum is a vegetable nosode. It has an action on the vasomotor nerves where there is first contraction and then dilatation of blood vessels. It is a good remedy for traumatic gangrene, ameliorated from cold.