Turbinate hypertrophy is a condition affecting the respiratory mucosa. The turbinates, also known as nasal conchae, is a part of the nasal fossa. They are six narrow, curled shelves of bone and connective tissue covered by a mucosa that protrude into the breathing passage of the nose. The turbinates ensure that the air passing through the nose is heated up and humidified. Sometimes they can become inflamed and increase in size. This is what happens when have turbinate hypertrophy. 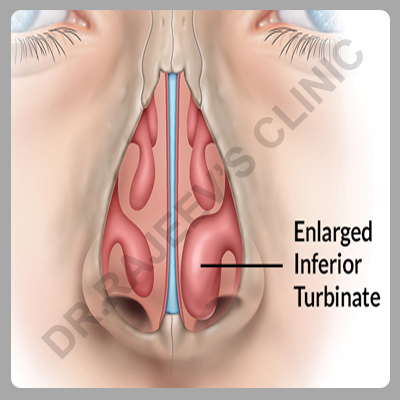 Turbinate hypertrophy can cause the following symptoms:

Some risk factors that may lead to turbinate hypertrophy are:

To confirm a diagnosis of turbinates hypertrophy, one will need to go through medical history with their doctor and do the following exams:

SANGUINERIA NITRICUM : Useful medicine for turbinate hypertrophy with nasal blockage with difficulty in breathing. They have to breathe through the mouth due to nasal blockage. There is dryness of mouth.Also Sometimes there is feeling of pressure at the root of the nose.Recommended for Sneezing and burning sensation in the nose

KALI BICHROME : Useful for turbinate hypertrophy in persons having a history of sinusitis.Helpful when the nose is dry and feels stopped up all the time.Also useful for loss of smell.There is pressure and pain  felt at the root of the nose. Useful for burning sensation and soreness feelingh in the nose