A pneumothorax can be caused by a blunt or penetrating chest injury, certain medical procedures, or damage from underlying lung disease. Or it may occur for no obvious reason. Symptoms usually include sudden chest pain and shortness of breath. On some occasions, a collapsed lung can be a life-threatening event.

The main symptoms of a pneumothorax are sudden chest pain and shortness of breath.

A pneumothorax can be caused by:

In general, men are far more likely to have a pneumothorax than are women. The type of pneumothorax caused by ruptured air blisters is most likely to occur in people between 20 and 40 years old, especially if the person is very tall and underweight.

Risk factors for a pneumothorax include: 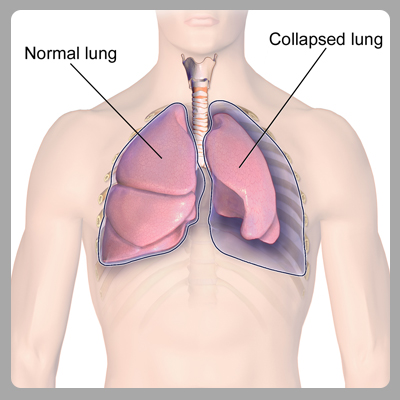 Many people who have had one pneumothorax can have another, typically within one to two years of the first.

Sometimes air may continue to leak if the opening in the lung will not close.

ACONITE : Very useful for pneumothorax with constant pressure in left chest.There is oppressed breathing on least motion.Useful for hoarse, dry, croupy cough with loud, labored breathing.Given when child grasps at throat every time he coughs.Useful for dry, short, hacking cough which worse at night and after midnight.

AMMON CARB : Useful for pneumotghorax when there is cough every morning about three o'clock, with dyspnœa, palpitation and burning in chest.Helpful when chest feels tired with much oppression in breathing which is worse after any effort, and entering warm room, or ascending even a few steps.

AMMON MUR : Useful for pneumothorax with hoarseness and burning in larynx. There is dry, hacking, scraping cough which is worse lying on back or right side. Given when cough loose in afternoon, with profuse expectoration and rattling of mucus.

ANTIM TART : Useful for pneumothorax with great rattling of mucus, but very little is expectorated. There is Velvety feeling in chest.Useful for burning sensation in chest, which ascends to throat. There is Rapid, short, difficult breathing; seems as if he would suffocate;

ARSENIC ALBUM : Useful for pneumothorax when patient is unable to lie down.There is fear of suffocation with constricted air paasage Air passage.There is burning in chest with Suffocative catarrh.Useful for scanty, frothy expectoration with Darting pain through upper third of right lung.

FERRUM PHOS : Useful in peumohorax in First stage of all inflammatory affections. Useful for hard, dry cough, with sore chest.