A lung abscess is a pus-filled cavity in lung surrounded by inflamed tissue. It usually results from breathing bacteria that normally live in mouth or throat into the lungs, leading to an infection.

Symptoms of a lung abscess commonly come slowly over weeks. They may include: 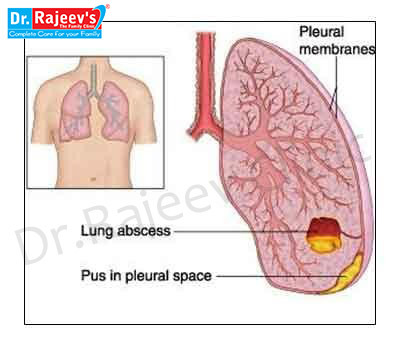 A number of things can cause a lung abscess, including:

Not being able to cough

A lung abscess is typically diagnosed in two ways:

Possible complications of a lung abscess include:

Homeopathy is one of the most popular holistic systems of medicine. The selection of remedy is based upon the theory of individualization and symptoms similarity by using holistic approach. This is the only way through which a state of complete health can be regained by removing all the sign and symptoms from which the patient is suffering.  lung abscess symptoms treatment that can be selected on the basis of cause, location, sensation, modalities and extension of the complaints. Some common homeopathic medicine use for this condition are China officinalis,Nitric acidicum,Calcarea carbonica,Hepar sulph,Kali carbonica,e.t.c