Hemoptysis is the coughing up of blood or blood-stained mucus from the bronchi, larynx, trachea, or lungs. In other words, it is the airway bleeding. This can occur with lung cancer, infections such as tuberculosis, bronchitis, or pneumonia, and certain cardiovascular conditions. 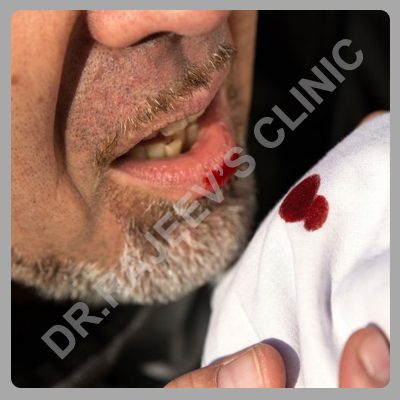 ACALYPHA INDICA :  Useful for Obstinate cases of arterial haemorrhage with burning in chest which is accompanied by emaciation, slow fever and small, depressed pulse.Given when blood is PURE BRIGHT-RED IN THE MORNING OR DARK AND CLOTTED IN THE EVENINg.Recommended when spitting of blood, brought on by violent dry cough.

ACONITE : Useful for hemoptysis with feeling of fulness and burning pain in chest.There is sensation as if the blood were boiling in chest, and followed by burning feeling under the sternum.There is anguish, restlessness fright and fear of death.

ANTIM CRUDE : Useful for hemoptysis which came after bathing.There is burning and sticking in chest during cough.

ANTIM TART : Useful for Frequent cough, with frothy, bloody sputa.Given when blood spitting comes after the attack which remains for a long time.There is bloody, slimy expectoration.

ARGENTUM NITRICUM : Useful for hemoptysis with occasional bloody sputa during belching.Given when there is straining to vomit during cough.Given when sputa more or less streaked with blood.

ARNICA : Useful for mechanical injuries & overstraining constant tickling cough, starting in larynx or under sternum.There is sore bruised feeling through chest.Given when there is bleeding of profuse, dark-red and clotted blood coming with little effort.

ARSENIC ALBUM : Useful for hemoptysis with deep, dry, unceasing cough from titillation in larynx.There is great weakness and fainting, with burning heat in chest and stomach,useful for extreme prostration after loss of blood.

Useful for hemoptysis , accompanied with convulsive cough.There is profuse expectoration of blood.Useful when there is marked arterial excitement with strong throbbing of heart .There is sensation as if constriction of an iron band prevented its normal motions; (<) from lying in bed; continued oppression and weariness; little anxiety or fever.

Useful for hemoptysis with dark, tough, coagulated blood which enveloped in viscid phlegm.Useful for bleeding which is caused by cardiac affections or portal congestion

Useful for hemoptysis when pure blood venous coming into the mouth without much effort.There is feeling that warm current comes out from chest.Useful for tickling cough, with the taste of blood in the morning on waking.