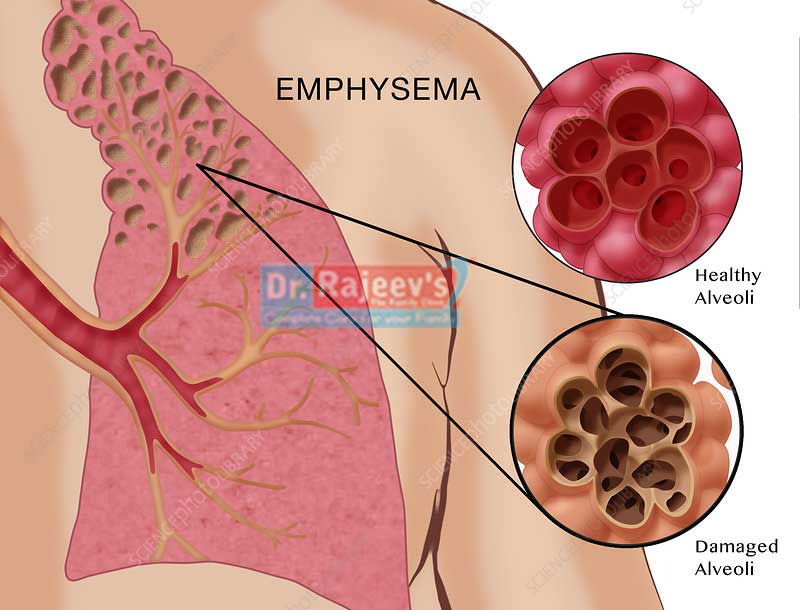 Emphysema is a lung condition that causes shortness of breath. In people with emphysema, the air sacs in the lungs (alveoli) are damaged. Over time, the inner walls of the air sacs weaken and rupture creating larger air spaces instead of many small ones. This reduces the surface area of the lungs and, in turn, the amount of oxygen that reaches the bloodstream.

When we exhale, the damaged alveoli do not work properly and old air becomes trapped, leaving no room for fresh, oxygen-rich air to enter.

Most people with emphysema also have chronic bronchitis. Chronic bronchitis is inflammation of the tubes that carry air to our lungs (bronchial tubes), which leads to a persistent cough.

Emphysema and chronic bronchitis are two conditions that make up chronic obstructive pulmonary disease (COPD). Smoking is the leading cause of COPD. Treatment may slow the progression of COPD, but it can not reverse the damage.

we may have emphysema for many years without noticing any signs or symptoms. The main symptom of emphysema is shortness of breath, which usually begins gradually.

We may start avoiding activities that cause us to be short of breath, so the symptom does not become a problem until it starts interfering with daily tasks. Emphysema eventually causes shortness of breath even while we are at rest.

The main cause of emphysema is long-term exposure to airborne irritants, including:

Rarely, emphysema is caused by an inherited deficiency of a protein that protects the elastic structures in the lungs. It is called alpha-1-antitrypsin deficiency emphysema.

People who have emphysema are also more likely to develop:

To prevent emphysema, do not smoke and avoid breathing second hand smoke. Wear a mask to protect lungs if work with chemical fumes or dust.

1. Ammonium Carb : Useful for emphysema when a person feels shortness of breath from moving even a few steps.Useful when Shortness of breath gets worse in a warm room and relieves in open air.Useful when Cough appear with difficult breathing and it tends to get worse at night. There is heaviness in chest along with chronic weakness.

2. Antimonium Arsenicosum  : Well-indicated medicine for emphysema with excessive dyspnea and cough. There is difficulty in breathing mostly on eating or lying down. There is appearance of cough with lots of mucus with shortness of breath.

3. Arsenic Album  : Useful for emphysema when intense anxiety appears with shortness of breath and cold sweat on the face .There is Shortness of breath appears on walking, exertion and even on lying down.Best used when breathing is easier by inclining chest forward.There is Cough and whistling in the chest accompanied with dyspnea.Also useful for expectoration which is scanty, frothy and difficult.

5. Silicea : Recommended ibn emphysema where person experience shortness of breath on walking fast.There is shortness of breath which is  felt on stooping and lying on back. Cough and soreness in the chest also appears. Useful for Cough which continues day and night.There is profuse expectoration may arise with the cough. There may appear offensive smell from phlegm.