The patient complains of sharp pain in the chest on inspiration , has a short], dry cough, with a moderately elevated temperature. On auscultation, friction sounds are heards. The disease is DRY PLEURISY.

Dry pleurisy is an inflammation of the pleura without effusion. However, there is a tendency to develop effusion and adhesions. The most obvious symptom is pain, which is described as sharp, stabbing, stitch like or knife like pain . this gives that characteristic catch during inspiration. All other actions like laughing, yawning, coughing aggravate this pain. There is no breathlessness but shortness of breath due to fear of pain.

The chief symptom associated with pleurisy is a sharp, stabbing pain when you breathe. This pain might go away when you hold your breath or put pressure on the painful area.

However, the pain will often get worse when sneeze, cough, or move. Fever, chills, and loss of appetite are also possible symptoms, depending on the condition that’s causing the pleurisy.

Additional symptoms of pleurisy include: 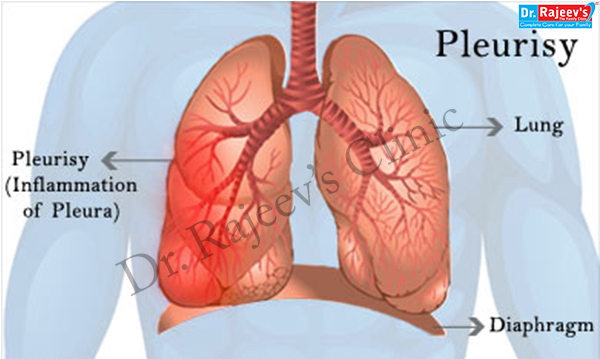 Pleurisy can be accompanied by a fluid buildup that puts pressure on the lungs and causes them to stop working properly. This fluid accumulation is called a pleural effusion. This fluid may initially act like a cushion, causing the chest pain to disappear.

A person with a pleural effusion will eventually experience shortness of breath as the fluid increases. An individual may also experience fever, chills, and a dry cough. These symptoms can indicate an infection in the fluid, also called an empyema.

Viral infections are the most common cause of pleurisy. Viruses can cause infections in the lungs, which can lead to pleurisy.

Other causes of pleurisy include:

The first priority in diagnosing pleurisy is to determine the location and cause of the inflammation or swelling. Your doctor will do a physical exam and take your medical history. Your doctor may also order one or more of the following tests:

Patient should remain in bed till the temperature subsides. The pain in the chest can be relived by strapping the chest of the patient to limit costal movements. Two pices of non elastic strapping should be applied at the end of expiration. the strap passes across the midline, in front and behind for two inches. In the past, antiphlogestic poultices were used.

Aconium napellus is one of the most important remedies. Pleurisy arising from exposure to cold or after sudden suppression of perspiration with distinct temperature is covered by this remedy. It has its characteristic mental restlessness with fear and dry. According to jahr, the whole trouble can be removed like magic with aconitum nepellus 30C, given every two or three hours.

Bryonia alba has dry, hacking cough from irritation of the upper trachea, worse at night, after eating or drinking. The patient must sit up. Difficult, quick respiration, worse from every movement; cause4 stitching pain in the chest. Bryonia alba invariably follows aconitum napellus when it has not completed its action or failed to control the march of the disease.

Ranunculus bulbosus is another remedy that has a sore and bruised feeling in the chest, right from the sternum, ribs and intercostals spaces, there is chilliness in the chest while walking in open air; breathing is short and oppressed with acute stabbing pain in the chest. The pulse is very rapid.