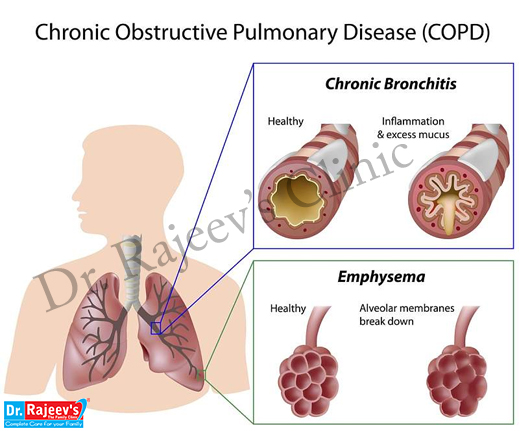 Emphysema is a chronic progressive disease of the lung. It is caused by the destruction of tissue surrounding air sacs (alveoli) in lungs. Due to this, alveoli cannot retain air inside them ultimately leading to shortness of breath.

Major causes include smoking and pollution.

Patients suffer lack of oxygen and excess of carbon dioxide in lungs. Patient exhibit shortness of breath. Symptoms usually get increased by physical activity. Eventually, it will occur after any physical exertion. Later on, the patient may complain of rapid breathing (tachypnoea). They may also lose weight. The anteroposterior diameter of the chest may increase (barrel chest).

Diagnosis of COPD is done by the doctor with the help of clinical examination and some simple tests, which include:

BRYONIA : Useful medicine for COPD with dry hacking cough with rust-coloured sputum.Given when symptoms aggravate by any slightest motion.Given when cough occurs immediately after entering a warm room.

RUMEX : Useful for COPD with dry teasing cough initially, followed by stringy cough.Recommended when Complaints increase on talking, by pressure and taking in cold air.

KALI BICHROME : Useful for COPD with yellow, stringy and sticky mucus. Given when complaints are worse in the morning.

HEPAR SULPH : Very useful for COPD with difficult inspiration which causes wheezing sound in chest.There is accumulation of cough in throat.