Bronchitis simply means an inflammation of the bronchus, the windpipe. This is usually caused by infection (viral, bacterial, fungal, etc) or allergy or both. This condition is widely prevalent throughout the world and is a frequent cause to disturb our daily work. 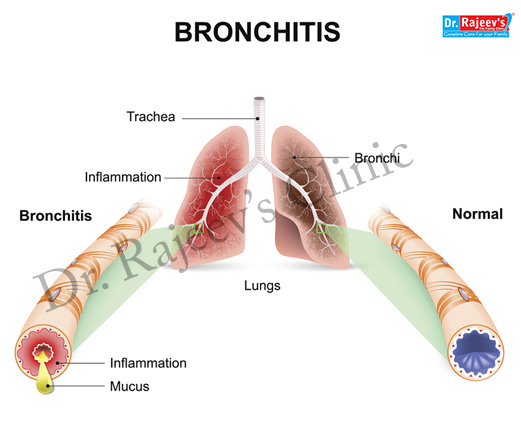 Cough is the most common symptom. The cough may be either dry (without mucus) or wet (with mucus), depending on the cause and severity. Allergic cough is often dry while infective cough has a tendency to have mucus production. The symptoms of Bronchitis may be listed as under:

A single episode of bronchitis which may resolve within less than three weeks may be called as an Acute Bronchitis.

If there is an underlying cause of lowered immunity,tendency to catch infection or if there are factors such as Smoking and environmental pollution; there may be a tendency to have Recurrent Bronchitis.

Those patients who have lowered immunity and are exposed to maintaining factors such as smoking, pollutants (pneumoconiosis, excessive alcohol consumption and exposure to cold and draught, etc.) may present with Chronic Bronchitis,where by the patients may have symptoms of Bronchitis for long time, as long as two months to over years.

Antimonium Tartaricum : Useful when the person has a feeling of wet mucus in the chest and breathing makes a bubbly, rattling sound. Helpful to experote cough which need effort.There is rattling sound in chest.Given when the person may feel drowsy or dizzy, and feel better when lying on the right side or sitting up.

Calcarea Carbonica : Mostly indicated for bronchitis after a cold. There is troublesome and tickling cough which get worse from lying down or stooping forward,getting cold, and worse at night.Useful for Children who may have fever, sweaty heads while sleeping, and be very tired whereas adults may feel more chilly and have clammy hands and feet and having breathing problems when walking up slopes or climbing stairs, and generally poor stamina.

Hepar Sulph : Very useful for hoarse and rattling cough with yellow mucus coming up.Recommended when person is extremely sensitive to cold even a minor draft or sticking an arm out from under the covers may set off jags of coughing. Cold food or drink can make things worse.There is feeling of vulnerable both physically and emotionally, and may act extremely irritable and out of sorts.

Kali Bichromicum : Useful for metallic, brassy, hacking cough that starts with a troublesome tickling in the upper air-tubes and brings up strings of sticky yellow mucus.There is sensation of coldness which may be felt inside the chest, and coughing can lead to pain behind the breastbone or extending to the shoulders. There is rattling sound from breathing when the person sleeps.Useful when problems are typically worse in the early morning, after eating and drinking, and from exposure to open air and feel better just lying in bed and keeping warm.

Silicea : Useful for bronchitis for weeks at a stretch, or even all winter long.There is yellowish or greenish mucus, or little granules that have an offensive smell.Therte is stitching pains which may be felt in the back when the person is coughing. Chills are felt more than heat during fever, and the person is likely to sweat at night.Helpful for  person who is usually sensitive and nervous, with low stamina, swollen lymph nodes, and poor resistance to infection.