Asbestosis is a chronic lung disease caused by inhaling asbestos fibers. Prolonged exposure to these fibers can cause lung tissue scarring and shortness of breath. Asbestosis symptoms can range from mild to severe, and usually don't appear until many years after continued exposure. 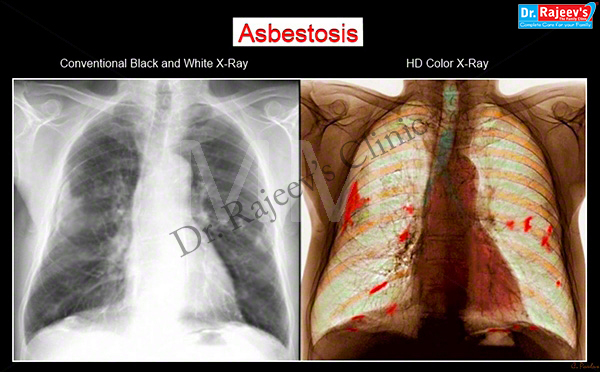 Asbestos is a natural mineral product that's resistant to heat and corrosion. It was used extensively in the past in products such as insulation, cement and some floor tiles.

Most people with asbestosis acquired it on the job before the federal government began regulating the use of asbestos and asbestos products in the 1970s. Today, its handling is strictly regulated. Acquiring asbestosis is extremely unlikely if you follow your employer's safety procedures. Treatment focuses on relieving your symptoms.

The effects of long-term exposure to asbestos typically don't show up for 10 to 40 years after initial exposure. Asbestosis signs and symptoms can include:

If you are exposed to high levels of asbestos dust over a long period of time, some of the airborne fibers can become lodged within your alveoli — the tiny sacs inside your lungs where oxygen is exchanged for carbon dioxide in your blood. The asbestos fibers irritate and scar lung tissue, causing the lungs to become stiff. This makes it difficult to breathe.

Smoking cigarettes appears to increase the retention of asbestos fibers in the lungs, and often results in a faster progression of the disease.

People who worked in mining, milling, manufacturing, installation or removal of asbestos products before the late 1970s are at risk of asbestosis. Examples include:

In general, it's safe to be around materials that are made with asbestos as long as the asbestos fibers are contained. This prevents them from getting into the air.

If you have asbestosis, you're at increased risk of developing lung cancer — especially if you smoke or have a history of smoking.

Reducing exposure to asbestos is the best prevention against asbestosis. In the United States, federal law requires employers in industries that work with asbestos products — such as construction — to take special safety measures.

Many homes built before the 1970s have materials such as pipes and floor tiles that contain asbestos. Generally, there's no cause for concern as long as the asbestos is enclosed and undisturbed. It's when materials containing asbestos are damaged that there's a danger of asbestos fibers being released into the air.

Asbestosis can be difficult to diagnose because its signs and symptoms are similar to those of many other types of respiratory diseases. A variety of diagnostic tests might be needed to help pinpoint the diagnosis.