Allergic Rhinitis or Pollinosis also known as Hay Fever is an allergy characterized by sneezing, itchy and watery eyes,running nose and a burning sensation of the palate and throat. It is usually caused by allergies to airborne substances such as dust, moulds, pollens, animal fur and feathers. It is often aggravated by a food allergy, the most common being an allergy to milk.

Hay fever is most common in people with a family history of similar complaints or a personal history of eczema, hives (urticaria), and/or asthma. 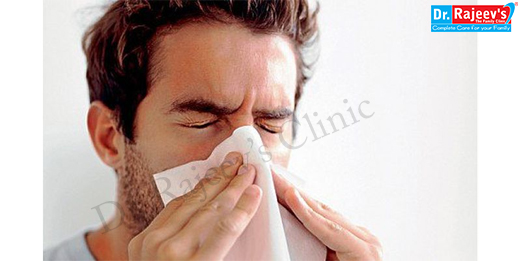 Signs and symptoms can be similar, so it can be difficult to tell which one you have.

Our body immune system identifies with  a harmless airborne substance which is harmful. Our immune system then produces antibodies to this harmless substance. Whenever our body come in contact with the substance, these antibodies signal our immune system to release chemicals such as histamine into our bloodstream, which causes a reaction that leads to the signs and symptoms of hay fever.

The following can increase our risk of developing hay fever:

Problems that may be associated with hay fever include:

Lessen exposure to the allergens that cause our symptoms. Take allergy medications before exposed to allergens.

The Homeopathic remedies are prepared from natural substances which work by stimulating the body's own healing power.

Homeopathy treats the patient who is diseased and not merely diseased parts of the patients. This holistic approach goes in a long way in the management of various chronic and deep-seated diseases.

Allium Cepa : Useful medicine when there is watery eyes and a clear nasal discharge that irritates the upper lip, along with sneezing and a tickling cough.Given when patient is thirsty and feels worse indoors and when rooms are warm, and better in fresh air.

Gelsemium : Useful when there is tired, droopy feeling with a flushed and heavy-feeling face.There is sensation of dryness or of swollen membranes may be felt inside the nose. Also useful when the nose may run with irritating watery discharge, with the person sneezing frequently. There is aching in the back of the head and neck with trembling feeling, and chills along the spine.