The adenoid is a mass of tissue located way in the root of the nose between the passage of nasal cavity and throat. Adenoid help fight out bacteria and viruses and produce antibodies to help the body fight off infections. Commonly in children the adenoid enlarges normally during early childhood say between 2-12 yrs when most infections of the nose and throat are common. They are rudimentary glands which usually shrink as the child gets older and tend to disappear by puberty. 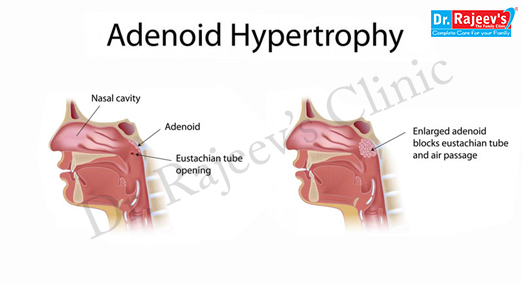 Adenoids are present at birth. They grow until a child is between the ages of 3 and 5. Normally, they begin to shrink after around age 7. They shrink considerably in adulthood.

They’re located in the passage that connects the back of the nasal cavity to the throat. They produce antibodies to help your body fight off infections. During the early years, adenoids help protect infants from infection by trapping bacteria and viruses that enter the body through the nose.

Adenoids that become infected usually become enlarged, but return to their normal size when the infection subsides. However, in some instances, the adenoids remain enlarged even after the infection is gone.

Enlarged adenoids can cause a number of symptoms, including:

Calcarea Carb- In children who have excessive sweating of the head, Calcarea Carb is one of the best Homeopathic remedies for enlarged adenoids. The child is usually fat and flabby. The child is very sensitive to cold air and takes cold easily at every change of weather. He is fond of eggs and does not like milk. At the same time he likes to have many indigestible things like chalk, coal and pencils. His appetite may increase with the catarrhal symptoms.

Baryta Carb- In cases where there is tonsillitis or enlargement of tonsils along with the hypertrophy of adenoids, Baryta Carb is one of the best Homeopathic medicines for adenoids enlargement. The child has catarrh of posterior nares. All sorts of glands swell and become hypertrophied. There may even be pus formation in the tonsils.

Tuberculinum- Tuberculinum is one of the best Homeopathic remedy for hypertrophied adenoids when the child has great sensitivity to cold air and low temperatures. There may be a tubercular history in the family. The child may seem to be mentally deficient.

Thuja – When there is a greenish discharge from the nose and the mucous membranes, Thuja is one of the best homeopathic medicine.