It is a common condition which results in enlarged male breast tissue. It can be seen in males of all ages, but usually occurs during the newborn period, puberty and older adulthood. There are many causes for gynecomastia in which most common is imbalance of the hormones testosterone and estrogen.

Gynecomastia is a condition of overdevelopment or enlargement of the breast tissue in men or boys. The breasts become larger or they may grow unevenly.

A lot of things can trigger the hormone imbalance that causes male breast growth, and many times the exact cause is unknown.It is often happens when a preteen or teenage boy is going through the hormonal changes of puberty. But it can also happen to newborn babies and to men as they age. 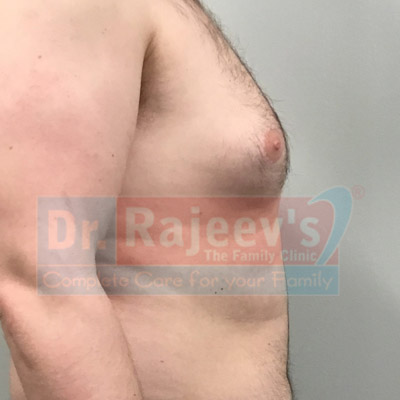 Other than body changes such as puberty and aging,other causes of gynecomastia are:

Some types of medicines can lead to gynecomastia, such as:

Anti-androgen-These are drugs that treat an enlarged prostate or prostate cancer.

Anabolic steroids and androgens-Athletes sometimes use these drugs illicitly in an effort to improve their athletic performance. The drugs also have legitimate uses for certain conditions.

HIV drugs-It can sometimes be a side effect of an HIV treatment called "highly active antiretroviral therapy."

Anti-anxiety drugs. Medicines such as diazepam (Valium) can sometimes cause gynecomastia.

Medicines used to empty your stomach- For example, metoclopramide (Reglan) can have gynecomastia as a side effect.

Ulcer drugs- Some medicines that you buy over the counter for ulcers can lead to gynecomastia, such as cimetidine (Tagamet HB).

Some diseases and medical conditions may also cause gynecomastia. These include:

Newborn babies may have a short-term form of gynecomastia. This is often because a mother’s estrogen stays in a baby’s blood for a while after birth.

1. There is formation of lump or fatty tissue beneath the nipple, which may be sore.

2. There is enlargement of breast unevenly.

3. There is swelling of breast

5. Discharge from the nipple of one or both breasts.

To rule out other diseases or conditions, you may also have tests including:

Don not use illicit or recreational drugs,such as anabolic steroids, androgens, amphetamines, marijuana, or heroin.

Avoid use alcoholGo over your medicine list with your doctor. If any of your medications can cause gynecomastia, ask if there are alternatives.

Gynecomastia can have an impact on mental health.There might be feeling of embarrassement or feel anxious or depressed.

CONIUM : It effects breast tissues either one or both mammary glands which occur as a result of low testosterone levels and high oestrogen level.There is hardness and induration of gland.Also useful in breast pain and inflammation Usef for prominent nipples having milky,sticky discharge from the breast.Mostly suited to bachelor males. Very useful for those patient suffering from emotional disturbance, severe embarrassment, anxiety, etc. Also useful when gynecomastia is the result of Orchitis(testicular swelling).

PHYTOLACCA D : Most useful remedy for Gynecomastia.There is aching,soreness as well as sensitiveness in breast.It has powerful effects on fibrous tissue.Also useful when "obesity" is the causes of gynecomastia.

THUJA : Useful in pitutary hormpne regulations.Recommended when there is a history of animal poisoning and bad effects of vaccination.Useful for gynecomastia with prostate enlargement.Usefull for left side of breast enlargement.It is also useful when there is stitchinf and tearing pain along with swelling of breast tissue.

CALCAREA PHOS : Useful for those patient who is having gland enlargement,who is anaemic and has spinal bone pain.Also useful when gynecomastia is cause due to Kline filter syndrome.

THYROIDINUM : Useful for those person who have improper functions of thyroid.Useful in gynecomastia who have a sweet tooth.There is stony hard glands of adrenal or testes.It help to reduces oestrogen level in the patient’s body and thus lessens the pain.

YOHIBINUM : It is useful when gynecomastia is due to hormonal imbalance.

TESTESTERONE : useful when gynecomastia is due to low testosterone levels in bodies.It help in reducing the oestrogen level in a male’s body and increasing the level of testosterone.

BARYTA CARB : Useful for Gynecomastia in old age.Suited for those patients who are timid, cowardly, shy of strangers, and is not very confiden

CALCAREA IOD : Useful for Gynecomastia in a flabby and obese person, hormonal changes during puberty and gynecomastia because of thyroid disease.Useful for thyroid enlargement in boys about the time of puberty who is flabby having adenoids and tonsillitis.