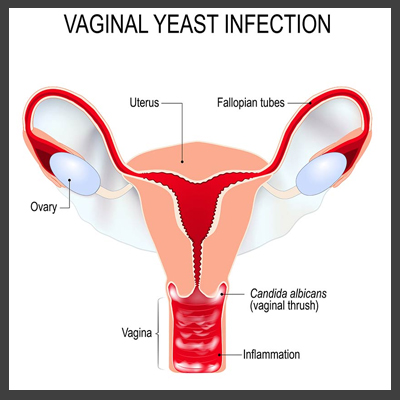 Medications can effectively treat vaginal yeast infections. If you have recurrent yeast infections — four or more within a year — you may need a longer treatment course and a maintenance plan.

Yeast infection symptoms can range from mild to moderate, and include:

The fungus candida albicans is responsible for most vaginal yeast infections.

Your vagina naturally contains a balanced mix of yeast, including candida, and bacteria. Certain bacteria (lactobacillus) act to prevent an overgrowth of yeast.

But that balance can be disrupted. An overgrowth of candida or penetration of the fungus into deeper vaginal cell layers causes the signs and symptoms of a yeast infection.

Overgrowth of yeast can result from:

Candida albicans is the most common type of fungus to cause yeast infections. Yeast infections caused by other types of candida fungus can be more difficult to treat, and generally need more-aggressive therapies.

Factors that increase your risk of developing a yeast infection include:

To reduce risk of vaginal yeast infections, wear underwear that has a cotton crotch and doesn't fit too tightly.

Calcarea carbonica : When this remedy is indicated, burning and itching feelings may occur both before and after the menstrual period. Discharge from vaginitis is milky and acrid or thick and yellow. A person who needs this remedy is often chilly and stout, has a craving for sweets, and is easily tired by exertion.

Kreosotum : This remedy is strongly indicated for vaginitis with watery, thin, unpleasant-smelling, very irritating discharge that makes the vulva swell and itch. Symptoms may be worse in the morning and worse when standing up. Infections are more likely to appear before the menstrual period or during pregnancy.

Natrum muriaticum : Vaginitis with discharge resembling egg-white, which itches and makes the vagina feel dry and irritated, is likely to respond to this remedy. A woman who needs this remedy often seems reserved, yet is very emotional inside. A craving for salt and a tendency to feel worse from being in the sun are other indications for Natrum muriaticum.

Sepia : If yeast infections cause vaginal discharge that is yellow and itchy, or white and curdlike, this remedy may be indicated. A woman needing Sepia often feels worn down and irritable, with cold extremities and and a weak or sagging feeling in the pelvic region. Discharge may be more profuse in the morning and increased by walking.

Borax : Yeast infections of the vagina with discharge resembling egg white, and a feeling that warm water is flowing out, suggest the use of this remedy. Vaginitis that responds to Borax usually appears midway between the menstrual periods. A person who needs this remedy is often nervous and very sensitive to noise.

Kali bichromicum : This remedy may be indicated in cases of vaginitis where discharge is yellow and tenacious, and makes the vulva itch and burn. Symptoms may be worse in the morning. The person feels better from resting and keeping warm.

Pulsatilla : When this remedy is indicated for yeast infections, symptoms may be changeable. A creamy white or yellowish discharge appears, which can be either bland or irritating. The vagina may feel sore, and the labia may itch or burn. The woman will be moody, possibly tearful, wanting a lot of attention and affection. This remedy is often helpful for vaginitis during pregnancy.

Sulphur : Discharge that looks yellowish, is offensive-smelling, and causes great burning and itching brings this remedy to mind. Symptoms may be aggravated by warmth and bathing.e.t.c