Uterine Fibroid or myoma is a non-cancerous, benign growth in the uterus. They are also called fibromyoma, myofibroma and fibroleiomyoma.

Fibroids vary in size and in location, they may be Intra mural (inside the cavity), Submucosal (in the wall of the uterus), Subserosal (on the outer side of uterus) or in the cervix at times.

Fibroids are typically found during the middle and later reproductive years and commonly seen in overweight women. 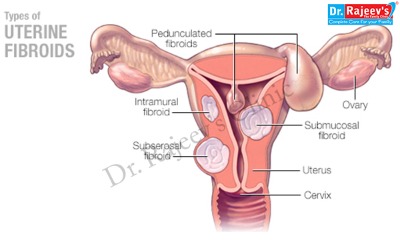 The diagnosis is primarily done by an Ultrasound (USG) abdomen.

Thlaspi Bursa Pastoris : Useful for treating uterine fibroids with prolonged menses.Given when menses continue for 10-15 days and appear very frequently as well.There is profuse menstrual bleeding with the presence of large clots.There is violent uterine colic during menses with cramping pain in the uterus

Calcarea Carb : Very useful medicine for treating heavy periods from uterine fibroids.Given when menses continue for long and may even appear early.Useful for vertigo during mense.There is thick, milky or yellow color leucorrhoea also.

Belladonna : Well-indicated medicines for uterine fibroids where the menses are painful.There is cramping pain in the uterus during menses. Also useful for profuse and bright red in colour.

Sepia : Recommended for griping, burning or bearing down pains during menses. Given when menses start early and are quite copious There is fainting and chilliness during menses.Also indicated for treating painful intercourse who is suffering from uterine fibroids

Ustilago Maydis : Most suitable medicine for uterine fibroids where menstrual bleeding is dark. There is also presence os clots in menstrual blood.Useful for uterine bleeding which is stringy in nature.

Sabina : Useful for menstrual bleeding with clots in uterine fibroid cases.Helpful when slightest motion increases menstrual bleeding.There is pain from sacrum to pubis and during menses there is pain in the uterus that gets better by lying on the back.Useful for uterine pain which may extend to the thighs. There is foul, acrid, corrosive, yellow leucorrhoea.