Homeopathic Treatment for Paget's disease of the nipple

It is also known as Paget’s disease of the breast which is a rare type of breast cancer. 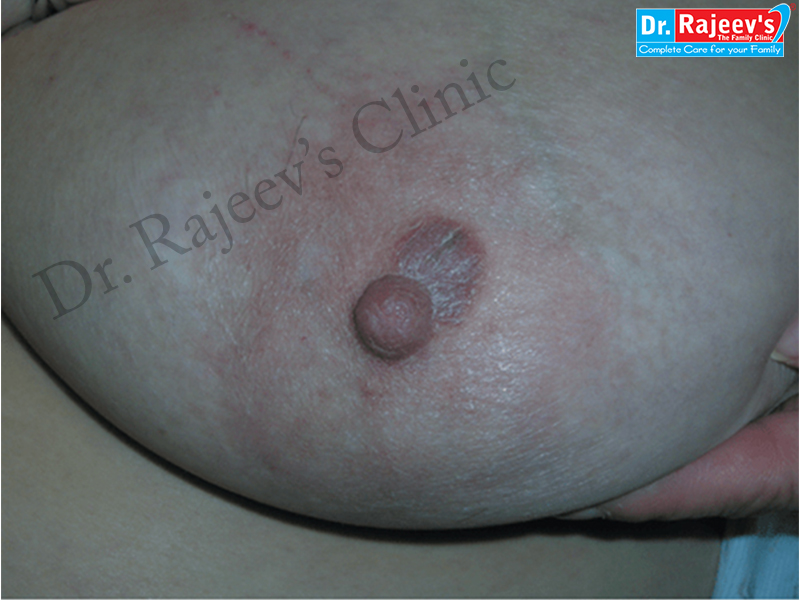 SYMPTOMS OF PAGET'S DISEASE OF NIPPLE

1.It usually affects the skin of one nipple and produces eczema-like symptoms, appearing as an itchy, red rash on the nipple that can extend to the darker area of surrounding skin (the areola).

2.It can also appear as a small ulcer or dry, red, flaky patches of skin similar to psoriasis.

Other possible symptoms include:

If one experiences itchiness, burning or bleeding but the nipple looks normal and is not red, dry or scaly – this is extremely unlikely to be Paget's disease but should still be checked by a doctor.

CAUSES OF PAGET'S DISEASE OF NIPPLE

Paget’s disease is usually a sign of breast cancer in tissue behind the nipple, or breast tissue away from the nipple.

The breast cancer can either be:

In a small amount of cases, the only evidence of Paget's disease is the nipple changes.

In about half of all cases of Paget’s disease of the nipple, a lump is found in the breast. The majority of people with a lump will have invasive breast cancer, although this does not necessarily mean it has spread.

Most people with Paget's disease of the nipple who do not have a lump will have non-invasive breast cancer.

DIAGNOSIS OF PAGET'S DISEASE OF NIPPLE

PREVENTION OF PAGET'S DISEASE OF NIPPLE

There are a number of factors that can increase  risk of developing breast cancer. These include:

Useful when patients suffering from  breast cancer as a hard tumor with piercing pain and stitches are felt in the breast and nipples upon breathing or doing any physical activity.

It is given to patients in the ulcerative stage when the patient suffers from acute pain in the breasts.There is swelling of the breasts.Also useful for retracted nipples.

Very effective in the treatment of breast cancer in which there is an open ulcer with furious discharge.There is pain with restlessness. Mostly recommended when patient would lose all hope to live.

Given to patients with an open ulcer in the breasts with discharge. Recommended when patient feels itching and a burning sensation in the chest.

Very useful in the treatment of breast cancer with open ulcers. There is acute pain with burning sensation.Given when breasts are swollen with red nipples.

Excellent homeopathic medicine for the treatment of breast cancer when the breast is hard. There is bloody discharge is seen from the breasts and the nipples are cracked.

Very useful in the primary stage and shrinkage of the cancerous deposit.