Maximum incidences are found in women between the age of 30-40 years of age. Spontaneous remission occurs after menopause, probably because of the withdrawal of ovarian stimulation. Pregnancy protects from endometriosis. Secondary dysmenorrhoea is common. It may start a few days before menses is to appear. Dysparunia is a common symptom. Increased frequency or irregular menses is common when the ovaries are involved. 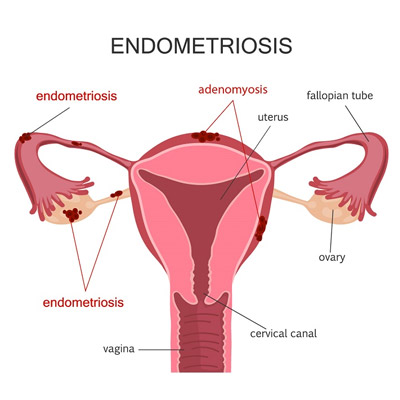 Common signs and symptoms of endometriosis include:

Although the exact cause of endometriosis is not certain, possible explanations include:

Several factors place you at greater risk of developing endometriosis, such as:

IODUM - There is great weakness during menses.Useful when menses are irregular, brown in colour and renewed after every stool.There is Wedge- like pain from ovary to uterus.Useful Right ovarian area is greatly sensitive after menses. Ovaritis.

PALLADIUM-Usefull for right ovaries.There is pain in the right ovary, better by pressure.Useful for Subacute pelvic peritonitis with menorrhagia, uterine prolapse with bretroversion.There is cutting pains in the uterus, relieved after stool.There is shooting and burning pains in the pelvic with bearing down pains, better by rubbing.There is soreness and shooting pains from the navel to the breast.Useful for glairy,yellow leucorrhoea, before and after menses.

SABINA - Usefull for the chronic ailments of women.There is arthritic pains with tendency to miscarriage and gouty diathesis.Given to those women having haemorrhagic tendency and nosebleeds.There is tendency to miscarriage, especially at the third month.Useful for dysmenorrhoea, better lying down flat on the bed, with limbs extended. There is too profuse, hot, of dark clots mixed with bright blood. Given when uterine pains extend into the thighs.There is increase desire of sex with shooting pains in the vagina.Also there is discharge of blood between periods.

SECALE COR - Usefull for Weak uterus or bearing down pains with coldness.There is brownish, offensive leucorrhoea.

PULSATILLA - Given for mild, gentle, plethoric women who have a yielding disposition and cry easily while taking.Indicated for chilly worse by warmth and thirstlessness must be present for this remedy to be prescribed.