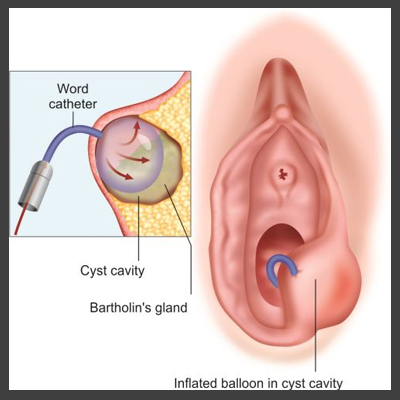 Bartholin’s cysts are most common in women aged 20-29, especially those who have never been pregnant or have only been pregnant very few times.

If someone have a small, noninfected Bartholin's cyst, she may not notice it. If the cyst grows, she might feel a lump or mass near her vaginal opening. Although a cyst is usually painless, it can be tender.

A full-blown infection of a Bartholin's cyst can occur in a matter of days. If the cyst becomes infected,one may experience:

2.This fluid travels from the Bartholin’s glands down ducts into the lower part of the entrance to the vagina.

3.If there is a blockage of mucus in these ducts, the lubricant accumulates. This buildup causes the ducts to expand and a Bartholin’s cyst to form.

3.The reaction of the immune system to a bacterial infectious agent may cause the blockage and subsequent abscess. Examples of these agents include:

While doctors do not consider Bartholin’s cyst to result exclusively from sexual transmission, N. gonorrhoeae is among the most common pathogens that doctors isolate when testing the cysts.

Bartholin’s cysts do not always cause pain. A person may have a cyst and not know about it until they undergo a routine examination by a doctor or have a consultation for other gynecological health concerns.

Major symptoms are not common. However, when symptoms do occur, they may include a slight lump in the labia. The cyst usually only develops in one of the two glands.

Cysts may not be noticeable at first, but they can sometimes have effects on the labia, causing one of the lips to become larger than the other

Sometimes, bacteria can enter the cyst fluid and cause a buildup of pus in the form of a Bartholin’s abscess. This abscess can be painful.

The abscess can develop rapidly. A person may notice the following symptoms in the area around the abscess:

The exact causes of duct blockage are often unclear, though bacteria have a role to play.

However, the following characteristics increase a person’s likelihood of developing a Bartholin’s cyst:

A doctor can usually diagnose this type of cyst during a pelvic examination.

They may advise an individual to undergo testing for sexually transmitted infections (STIs) on discovering a Bartholin’s cyst. This process will involve urine or blood tests, as well as a swab from the genital area.

If the person has entered menopause, the doctor may recommend a biopsy of the cyst to rule out vulvar cancer.

As doctors are unsure as to the cause of the initial duct blockage, there are not many recommendations for preventing a Bartholin’s cyst.

However, because STIs, such as gonorrhea and chlamydia, can cause the cyst, people who are sexually active can reduce their risk by using barrier contraception, such as a condom or dental dam.

A Bartholin’s cyst is a growth on the Bartholin’s glands, which provide lubrication during sexual contact.

The cyst is often painless and barely noticeable until a doctor diagnoses it during a routine examination or while investigating another health condition.

Bacterial infectious agents often cause the initial duct blockage that leads to Bartholin’s cysts, although the exact mechanisms behind the blockage are often unclear. Some STIs, such as gonorrhea and chlamydia, can cause the cyst.

It is often safe to leave small, painless cysts alone or use home remedies to address any discomfort.

However, large cysts or those that have become abscesses may need further medical attention. Several procedures are available for the management of Bartholin’s cysts, including balloon catheter inflation.

It is important to seek consultation about any unusual lumps on the vulva or vagina to rule out cancers and other health concerns.

Homeopathy treats the person as a whole. It means that homeopathic treatment focuses on the patient as a person, as well as his pathological condition. The homeopathic medicines are selected after a full individualizing examination and case-analysis, which includes the medical history of the patient, physical and mental constitution, family history, presenting symptoms, underlying pathology, possible causative factors etc. A miasmatic tendency (predisposition/susceptibility) is also often taken into account for the treatment of chronic conditions. A homeopathy doctor tries to treat more than just the presenting symptoms. The focus is usually on what caused the disease condition? Why ‘this patient’ is sick ‘this way’. The disease diagnosis is important but in homeopathy, the cause of disease is not just probed to the level of bacteria and viruses. Other factors like mental, emotional and physical stress that could predispose a person to illness are also looked for. No a days, even modern medicine also considers a large number of diseases as psychosomatic. The correct homeopathy remedy tries to correct this disease predisposition. The focus is not on curing the disease but to cure the person who is sick, to restore the health. If a disease pathology is not very advanced, homeopathy remedies do give a hope for cure but even in incurable cases, the quality of life can be greatly improved with homeopathic medicines.

The homeopathic remedies (medicines) given below indicate the therapeutic affinity but this is not a complete and definite guide to the homeopathy treatment of this condition. The symptoms listed against each homeopathic remedy may not be directly related to this disease because in homeopathy general symptoms and constitutional indications are also taken into account for selecting a remedy.