Nabothian cysts are cysts filled with mucus that look like tiny bumps on the surface of the cervix. They are usually 2 millimeters to 10 millimeters in diameter, and they contain mucus that ranges in color from pale yellow to amber. 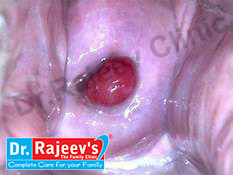 Nabothian cysts do not cause any symptoms unless they become very large.

Expected Duration : Nabothian cysts are usually a long-term condition. Over time, some cysts may get bigger.

Because nabothian cysts are considered to be normal, it is not necessary to prevent them.