Ulcerative colitis - This condition causes long-lasting inflammation and sores (ulcers) in the innermost lining of large intestine (colon) and rectum.

Crohn's disease - This type of IBD is characterized by inflammation of the lining of digestive tract, which often spreads deep into affected tissues.

IBD can be debilitating and sometimes leads to life-threatening complications

Inflammatory bowel disease symptoms vary, depending on the severity of inflammation and where it occurs. Symptoms may range from mild to severe.

Signs and symptoms that are common to both Crohn's disease and ulcerative colitis include:

The exact cause of inflammatory bowel disease remains unknown. Previously, diet and stress were suspected, but now doctors know that these factors may aggravate but donot cause IBD.

One possible cause is an immune system malfunction. When our immune system tries to fight off an invading virus or bacterium, an abnormal immune response causes the immune system to attack the cells in the digestive tract, too.

Heredity also seems to play a role in that IBD is more common in people who have family members with the disease. However, most people with IBD do not have this family history. 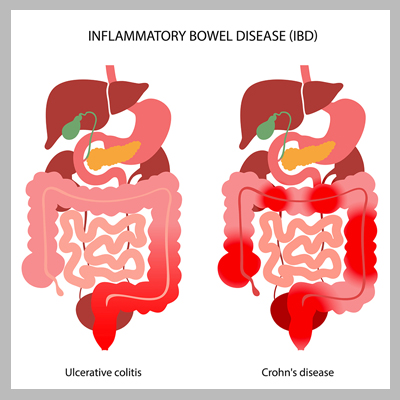 MERC COR : Useful for IBD when blood and shreds of mucus membrane passed with stool.There is constant urge to pass stool.very useful for scanty,hot and offensive stool.There is unsatisfactory urge of stool.

COLCHICUM : Useful for IBD when threre is excessive jelly like mucus in stool.There is severe nausea tendency from sight of food.

ARSENIC ALBUM : Usefull for IBD with offensive and dark coloured blood in stool.Usefull when complaint become worse at night.There is extreme weakness.Also usefull for burning pain in abdomen and rectum.