Patient develops sudden rise in fever. Temperature rises in a short time to 102-104 F, with severe headache, pain behind the eyes, shivering, anorexia, pain in the limbs and back. These are the characteristic features of INFLUENZA FEVER.

There may be true bradycardia; malaise and prostration are out of proportion to the temperature. Catarrh usually accompanies. 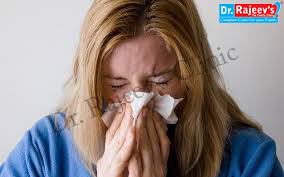 At first, the flu may seem like a common cold with a runny nose, sneezing and sore throat. But colds usually develop slowly, whereas the flu tends to come on suddenly. And although a cold can be a bother, usually feel much worse with the flu.

Common signs and symptoms of the flu include:

Influenza viruses travel through the air in droplets when someone with the infection coughs, sneezes or talks. we can inhale the droplets directly, or  pick up the germs from an object — such as a telephone or computer keyboard — and then transfer them to your eyes, nose or mouth.

People with the virus are likely contagious from about a day before symptoms appear until about five days after they start. Children and people with weakened immune systems may be contagious for a slightly longer time.

Influenza viruses are constantly changing, with new strains appearing regularly. If we had influenza in the past, our body has already made antibodies to fight that specific strain of the virus. If future influenza viruses are similar to those  encountered before, either by having the disease or by getting vaccinated, those antibodies may prevent infection or lessen its severity. But antibody levels may decline over time.

Pneumonia is one of the most serious complications. For older adults and people with a chronic illness, pneumonia can be deadly.

Eupatorium perfoliatum has hoarseness, worse in the morning and cough with extreme soreness in the chest, along the trachea. There is aching all over the body and the temperature creeps in between 7 am to 9 pm. It is preceded by headache and an insatiable thirst, which rarely continues into fever.

Influenzinum is a nosode prepared from the influenza virus. It is usually prescribed in 12C or 30C, either in liquid or pill form. Usually, ten pellets are dissolved in six ounces of water, a dessert spoon is taken as a dose. It is claimed that it is sufficient to control a large part of the population.

According to Clarke. “ when there is beginning of cold that appears in the family, prescribe arsenicum album 3C to all those who are not affected, thrice daily and given influenzinum 30C, every one hour or two. It generally prevents the spread of the trouble and clears up the colds whether they are of influenza type or not.

Oscillococcinum, a nosode was described by joseph roy in the year 1925. Some oscillatory movements were detected in the germs during the culture. Dr pierre Schmidt says it is very userin the beginning of influenza as well as during convalescence. It is useful in all type of influenza, especially in the early stages and in bursting headache with muscular aches. Use the remedy in 200C every two to three hours or repeat only if necessary.