Patient complains of localized redness with photophobia, blapharospasm, profuse watering if the eye and cloudiness of the cornea. It is a case of CORNEAL ULCER.

Primarily, the ulcers appear due to local trauma, such as an abrasion, burn, foreign body or in growing eyelash. 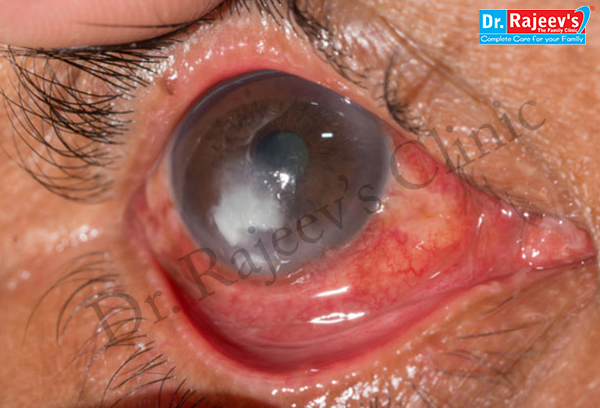 MANAGEMENT AND TREATMENT FOR CORNEAL ULCER

Attend to the general health of the patient and try to remove the cause as far as possible. Bathe the eye with an aqueous solution of calendula officinalis mother tincture at least two hourly.

Calcarea carbonica suits spots and ulcers on the cornea. The typical calcarea carbonica constitution is present. Lachrymation early in the morning and in open air. Dimness of vision, as if looking through mist.

Pulsatilla nigricans is for superficial ulcers of the cornea. Spots on the cornea. There is a thick, yellow, profuse and bland discharge from the eyes. Eyes burn and itch; must rub them. Weeping eyes; profuse, acrid lachrymation and secretion of mucous.

Hepar sulphuris suits corneal ulcers with red and inflamed eyes and lids. Severe, boring pain in eyes, as if they are pulled back into the orbits. Eyeballs very sore to touch. Photophobia.

Mercurius corrosivus has deep ulcers on the cornea, with excessive photophobia and acrid lachrymation. Iris appears muddy in colour and neither dilates nor contracts. Shooting, burning, tearing pain in eyes, especially at night. Burning, soreness of eyes.

Silicea terra is indicated in perforating or sloughing ulcer of the cornea. Abscess. After trauma. Eyes inflamed with sharp pains. Eyes are tender to touch, worse when closed. Canthi are specially affected.