A chalazion is a red bump on our eyelid. It is sometimes called an eyelid cyst or a meibomian cyst. It slowly forms when an oil gland (called a meibomian) becomes blocked. 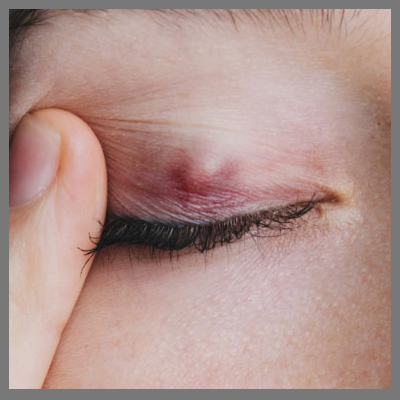 People sometimes confuse between chalazion with a stye due to the similarities in appearance. A stye is also a small lump that can develop in the eye area.

A chalazion results from a blocked oil gland, whereas a stye indicates an infected oil gland or hair follicle. However, a chalazion can sometimes develop into a stye.

The most noticeable difference between a chalazion and a stye is that a chalazion tends to be painless whereas a stye is usually very painful and may cause the eye to feel sore and scratchy.

Other symptoms of a stye can include:

A chalazion typically occurs in a person with an underlying inflammatory condition that affects the eyes or skin. Some of these conditions include:

Less commonly, chalazia develop due to viral conjunctivitis, which is a type of eye infection.

Individuals who have had a stye or chalazion have an increased risk of developing chalazia in the future.

Other risk factors for a chalazion include:

SILICEA : Useful for chalazion which appear after ill-effects of vaccination.Helpful in all condition like suppurative processes, pustulous borrowings, fistulous openings and abscesses are stubborn.Suited for chilly patient.Useful for encysted tumours of the lids.

STAPHYSAGRIA : Useful for chalazion in which there is bursting and burning pain in the lids and eyeballs.Also there is itching in margins of eyelids.