Restless leg syndrome is a disorder characterized by a powerful, irresistible urge to move one’s legs.

Many unpleasant sensations like those of burning, aching, or bugs creeping, crawling, tugging, etc. in the legs, make the person want to move them constantly. These sensations are strongest when the person relaxes his legs, lies down or while sitting. They can be intense enough to make the person unusually irritable and disturbs many a good night’s sleep.

WHO CAN HAVE RESTLESS LEG SYNDROME?

RLS can affect men, women and children. It is less common in persons below 20 years. Pregnancy is also known to cause RLS though how, is unclear. Usually it appears in the last trimester of pregnancy and disappears after delivery. Persons of North European descent are more likely to develop RLS. The French-Canadian populations are also more prone to RLS. RLS before 20 years is usually of a genetic origin. There is a strong history of close relatives (parents or siblings) suffering from the same. 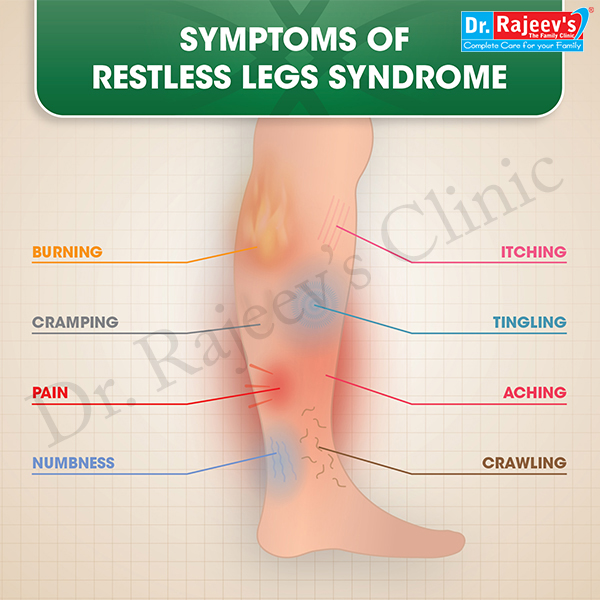 Many diseases and conditions can trigger RLS in vulnerable persons, while some conditions worsen the severity of RLS in sufferers:

Whenever the cause of RLS can be ascertained, it is called secondary RLS. The condition id termed as secondary RLS when there is no appreciable cause. These persons usually have a genetic tendency to RLS. Scientists today believe that RLS can occur within families as an autosomal dominant trait. These persons develop the symptoms at an earlier age (less than 20 years).

Primarily, RLS is thought of as a sensory disorder. Persons use many descriptive terms to explain the vague, indistinct sensations they feel. Often the same person may suffer from multiple types of sensations.

However, one common line running through all types of sensations is, the irresistible, overwhelming impulse to keep moving one’s legs.

Are some words expressing the feelings of persons suffering from RLS. These sensations usually occur deep within the muscles. More common in the legs and thighs, occasionally, even the arms can present with unpleasant sensations. They generally occur when the person has long periods of inactivity:

RLS can contribute to insomnia and increased day time drowsiness, and fatigue not only in the sufferer but also in persons sharing their beds! Many people find their symptoms reduce by early morning and are hardly noticeable by the day. Symptoms commonly are more severe at the onset of sleep in the night.

RLS may start in any stage of life and is more common with increasing age. Intensities and frequencies vary for different persons. Very mild symptoms are initially missed by the person. Symptoms tend to worsen faster when onset is delayed.

Initially, the symptoms may occur once or twice a week. Later, it may become more frequent and disrupt routine activities of the person. Thus, while some experience RLS only in the night time, others suffer from it all day.

The National Institute of Health (NIH) has provided the diagnostic criteria. Persons are diagnosed as suffering from RLS when the following are present:

Additional information that your doctor may want to know:

Currently, no tests are available to diagnose RLS.

A diagnosis of primary RLS cannot be made until every possibility of secondary RLS has been ruled out.

Both physical exams as well as laboratory investigations are needed.

Mild to moderate forms of RLS are improved by changes in diet and lifestyles.

TIPS ON LIVING WITH RLS: