Seventy-five percent of children experience at least one episode of otitis media by their third birthday. Almost half of these children will have three or more ear infections during their first 3 years.

It is estimated that medical costs and lost wages because of otitis media amount to $5 billion* a year in the United States. Although otitis media is primarily a disease of infants and young children, it can also affect adults.

The ear consists of three major parts: the outer ear, the middle ear, and the inner ear. The outer ear includes the pinna--the visible part of the ear--and the ear canal. The outer ear extends to the tympanic membrane or eardrum, which separates the outer ear from the middle ear. The middle ear is an air-filled space that is located behind the eardrum. The middle ear contains three tiny bones, the malleus, incus, and stapes, which transmit sound from the eardrum to the inner ear. The inner ear contains the hearing and balance organs. The cochlea contains the hearing organ which converts sound into electrical signals which are associated with the origin of impulses carried by nerves to the brain where their meanings are appreciated. 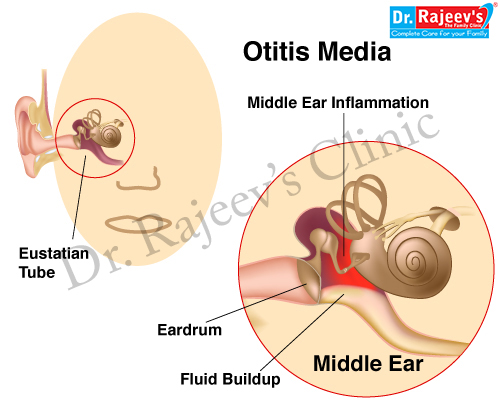 There are many reasons why children are more likely to suffer from otitis media than adults. First, children have more trouble fighting infections. This is because their immune systems are still developing. Another reason has to do with the child's eustachian tube. The eustachian tube is a small passageway that connects the upper part of the throat to the middle ear. It is shorter and straighter in the child than in the adult. It can contribute to otitis media in several ways

One more factor that makes children more susceptible to otitis media is that adenoids in children are larger than they are in adults. Adenoids are composed largely of cells (lymphocytes) that help fight infections. They are positioned in the back of the upper part of the throat near the eustachian tubes. Enlarged adenoids can, because of their size, interfere with the eustachian tube opening. In addition, adenoids may themselves become infected, and the infection may spread into the eustachian tubes

Bacteria reach the middle ear through the lining or the passageway of the eustachian tube and can then produce infection, which causes swelling of the lining of the middle ear, blocking of the eustachian tube, and migration of white cells from the bloodstream to help fight the infection. In this process the white cells accumulate, often killing bacteria and dying themselves, leading to the formation of pus, a thick yellowish-white fluid in the middle ear. As the fluid increases, the child may have trouble hearing because the eardrum and middle ear bones are unable to move as freely as they should. As the infection worsens, many children also experience severe ear pain. Too much fluid in the ear can put pressure on the eardrum and eventually tear it.

What are the effects of otitis media ?

Otitis media not only causes severe pain but may result in serious complications if it is not treated. An untreated infection can travel from the middle ear to the nearby parts of the head, including the brain. Although the hearing loss caused by otitis media is usually temporary, untreated otitis media may lead to permanent hearing impairment. Persistent fluid in the middle ear and chronic otitis media can reduce a child's hearing at a time that is critical for speech and language development. Children who have early hearing impairment from frequent ear infections are likely to have speech and language disabilities

How can someone tell if a child has otitis media ?

Otitis media is often difficult to detect because most children affected by this disorder do not yet have sufficient speech and language skills to tell someone what is bothering them. Common signs to look for are

How do we diagnose otitis media ?

The simplest way to detect an active infection in the middle ear is to look in the child's ear with an otoscope, a light instrument that allows the physician to examine the outer ear and the eardrum. Inflammation of the eardrum indicates an infection. There are several ways that a physician checks for middle ear fluid. The use of a special type of otoscope called a pneumatic otoscope allows the physician to blow a puff of air onto the eardrum to test eardrum movement. (An eardrum with fluid behind it does not move as well as an eardrum with air behind it.)

A useful test of middle ear function is called tympanometry. This test requires insertion of a small soft plug into the opening of the child's ear canal. The plug contains a speaker, a microphone, and a device that is able to change the air pressure in the ear canal, allowing for several measures of the middle ear. The child feels air pressure changes in the ear or hears a few brief tones. While this test provides information on the condition of the middle ear, it does not determine how well the child hears. A physician may suggest a hearing test for a child who has frequent ear infections to determine the extent of hearing loss. The hearing test is usually performed by an audiologist, a person who is specially trained to measure hearing.

Homoeopathic medicines help in reducing the intensity and frequency of attacks thereby increasing the immunity of the individual. Homoeopathy is strongly recommended for such problems